Cult of Glory: The Bold and Brutal History of the Texas Rangers (Hardcover) 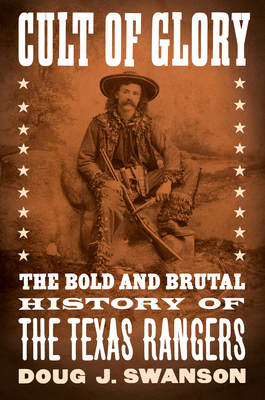 “Swanson has done a crucial public service by exposing the barbarous side of the Rangers.” —The New York Times Book Review

A twenty-first century reckoning with the legendary Texas Rangers that does justice to their heroic moments while also documenting atrocities, brutality, oppression, and corruption

The Texas Rangers came to life in 1823, when Texas was still part of Mexico. Nearly 200 years later, the Rangers are still going--one of the most famous of all law enforcement agencies. In Cult of Glory, Doug J. Swanson has written a sweeping account of the Rangers that chronicles their epic, daring escapades while showing how the white and propertied power structures of Texas used them as enforcers, protectors and officially sanctioned killers.

Cult of Glory begins with the Rangers' emergence as conquerors of the wild and violent Texas frontier. They fought the fierce Comanches, chased outlaws, and served in the U.S. Army during the Mexican War. As Texas developed, the Rangers were called upon to catch rustlers, tame oil boomtowns, and patrol the perilous Texas-Mexico border. In the 1930s they began their transformation into a professionally trained police force.

Countless movies, television shows, and pulp novels have celebrated the Rangers as Wild West supermen. In many cases, they deserve their plaudits. But often the truth has been obliterated. Swanson demonstrates how the Rangers and their supporters have operated a propaganda machine that turned agency disasters and misdeeds into fables of triumph, transformed murderous rampages--including the killing of scores of Mexican civilians--into valorous feats, and elevated scoundrels to sainthood. Cult of Glory sets the record straight.

Beginning with the Texas Indian wars, Cult of Glory embraces the great, majestic arc of Lone Star history. It tells of border battles, range disputes, gunslingers, massacres, slavery, political intrigue, race riots, labor strife, and the dangerous lure of celebrity. And it reveals how legends of the American West--the real and the false--are truly made.

Doug J. Swanson is the author most recently of Blood Aces: The Wild Ride of Benny Binion, the Texas Gangster Who Created Vegas Poker. He was for many years an investigative reporter and editor at The Dallas Morning News, and is a member of the Texas Institute of Letters. He was a finalist for the Pulitzer Prize in feature writing, and spent a year as a John S. Knight Journalism Fellow at Stanford University. Swanson currently teaches writing at the University of Pittsburgh.

Praise for Cult of Glory:

“Scorches the reputations of such legendary Rangers as Ben McCulloch and William `Bigfoot’ Wallace for massacring Native Americans and Mexican-Americans willy-nilly . . . Swanson has done a crucial public service by exposing the barbarous side of the Rangers.” —The New York Times Book Review

“Swanson punctures the myth of the Texas Rangers as `quiet, deliberate, gentle’ men, describing them instead as `the violent instruments of repression’ . . . Cult of Glory will thus surely discomfit some of those who pick it up, even as it confirms for others their sense that the Rangers frequently served as anything but impartial arbiters of justice.” —The Wall Street Journal

“[Cult of Glory] rigorously chronicles two centuries of Ranger misadventures and atrocities, as well as commendable operations undertaken by the Rangers in recent decades . . . [and] strives to be as panoramic as possible, telling a big story on a big canvas . . . it also strives to supplant the Ranger narratives of yore by synthesizing decades of others’ research as well as Swanson’s own findings.” —John Phillip Santos, Texas Monthly

“For any student of Texas history, [Cult of Glory] is a treasure, on several levels . . . A fascinating historical narrative, packed with colorful episodes and outsize characters . . . In setting the record straight about the Texas Rangers, Swanson clarifies and enriches the remarkable story of Texas for everyone.” —Houston Chronicle

“A harrowing deep dive into the Rangers’ darkest moments . . . What Swanson found in his thousands of documents is that the history of the Rangers is hardly a pretty picture when it comes to documenting their treatment of people of color.” —The Dallas Morning News

“In an era in which some desire a return to a perceived greatness, books like this remind us greatness is often reliant on the selective memory of storytellers.” —Library Journal (starred review)

“Cult of Glory is a masterpiece of American history. Period. Doug Swanson has taken on the Texas Ranger legend in all of its terrifying magnificence, disassembled it, and created in its place a real, true, and shockingly new history.” —S.C. Gwynne, author of Empire of the Summer Moon

"Utterly absorbing and sweeping in scope. Doug J. Swanson has stripped away the clichés and mythology of the Texas Rangers and written a meticulous and propulsive narrative that's a delight to read.” —Gilbert King, Pulitzer-Prize winning author of Beneath a Ruthless Sun

“The conquest of the American West was a ruthless, sanguinary affair. At long last, Doug J. Swanson’s Cult of Glory resurrects the truth about the Texas Rangers and their complicated history, and it’s a far stranger, more fascinating tale than any you’ve ever read about the storied lawmen. A revelatory masterpiece.” —Melissa del Bosque, author of Bloodlines: The True Story of a Drug Cartel, the FBI, and the Battle for a Horse-Racing Dynasty

“The Rangers in Swanson's Cult of Glory are, by turns, heroic, villainous, astonishingly brave and sometimes breathtakingly inept. Every chapter—and I mean every single one—contains a character who could have been sprung straight out of a screenwriter's imagination.” —Skip Hollandsworth, author of The Midnight Assassin

“Cult of Glory is a remarkable feat of reporting, conjuring the crimes and courage of the Texas Rangers while dismantling toxic American myths—from the romanticized anti-hero to American exceptionalism. Swanson refuses to reduce the Texas Rangers to a monolith, instead breathing cinematic life into their diverse makeup of white supremacists, cold-blooded murderers and heroes. In gripping prose, he reveals the contradictions that forged America and fueled the earliest border wars. It’s a wild and timely ride you need to go on—adrenaline-packed and enlightening.”
—Jean Guerrero, Emmy-winning journalist and author of Crux: A Cross-Border Memoir and Hatemonger: Stephen Miller, Donald Trump, and the White Nationalist Agenda