This Is the Night Our House Will Catch Fire: A Memoir (Hardcover) 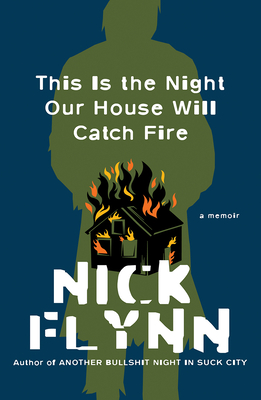 A searing memoir from critically acclaimed author Nick Flynn, on how childhood spills into parenthood.

When Nick Flynn was seven years old, his mother set fire to their house. The event loomed large in his imagination for years, but it’s only after having a child of his own that he understands why. He returns with his young daughter to the landscape of his youth, reflecting on how his feral childhood has him still in its reins, and forms his memories into lyrical bedtime stories populated by the both sinister and wounded Mister Mann.

With the spare lyricism and dark irony of his classic, Another Bullshit Night in Suck City, Flynn excavates the terrain of his traumatic upbringing and his mother’s suicide. This Is the Night Our House Will Catch Fire unravels the story of the fire that Flynn had to escape, and the ways in which, as an adult, he has carried that fire with him until it threatens to burn down his own house. Here Nick confronts his failings with fierce candor, even as they threaten to tear his family apart. His marriage in crisis, Flynn seeks answers from his therapist, who tells him he has “the ethics of a drowning man.”

This Is the Night Our House Will Catch Fire takes us on the journey of a man struggling to hold himself together in prose that is raw and moving, sharp-edged and wry. Alternating literary analysis and philosophy with intimate memoir, Flynn probes his deepest ethical dilemmas.

Nick Flynn is the author of This Is the Night Our House Will Catch Fire and three previous memoirs, including the PEN/Joyce Osterweil Award–winning Another Bullshit Night in Suck City, and four volumes of poetry. A professor on the creative writing faculty at the University of Houston, he lives in Brooklyn, New York.

Nick Flynn writes like a wicked angel—heartbreaking and challenging yes, but with an undercurrent of comfort that comes from the fact that you can trust this voice. We need this book, now more than ever.
— Dorothy Allison, author of Bastard Out of Carolina

Master of the lyric memoir, Nick Flynn has done it again. In This is the Night Our House Will Catch Fire, he weaves a hypnotic path through memory that is part nightmare, part fairy tale, part antihero’s journey, and tolling at every turn with the haunting voice of a past that refuses to stay gone…If all such sobering truths could be rendered with the beauty of his sentences, we might be better able to hold them.

— Melissa Febos, author of Whip Smart and Abandon Me

The enthralling performance of Nick Flynn’s prose (vast, lyrical, and philosophic) takes us once again to the smoldering haunts of human loneliness and the possibility of walking with sight. Against the backdrop of a marriage seeking firm ground and fatherhood that feels, at times, Sisyphean, such a transfiguring imagination as his allows us to realize memory curates language toward understanding and no aspect of the human journey is tangential; it’s full of miracles, grace, splendor, and fire.
— Major Jackson, author of The Absurd Man

This latest memoir in Nick Flynn’s remarkable body of work is at once tender and searing—suffused with longing, ruthless self-inquiry, intellectual rigor, and most of all, desire: desire to remember, to forget, to forge a family, to blow it all to smithereens. I read it on the edge of my seat.
— Dani Shapiro, author of Inheritance