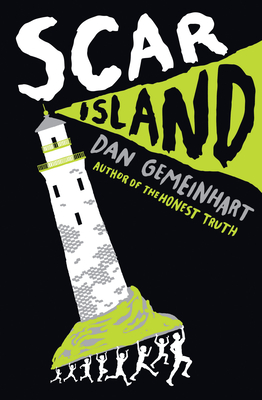 Dan Gemeinhart brings his signature blend of action, heart, and beautiful writing to a tale of misfits struggling to survive.
Jonathan Grisby is the newest arrival at the Slabhenge Reformatory School for Troubled Boys--an ancient, crumbling fortress of gray stone rising up from the ocean. It is dark, damp, and dismal. And it is just the place Jonathan figures he deserves.

Because Jonathan has done something terrible. And he's willing to accept whatever punishment he has coming.

Just as he's getting used to his new situation, however, a freak accident leaves the troubled boys of Slabhenge without any adult supervision. Suddenly the kids are free, with an entire island to themselves. But freedom brings unexpected danger. And if Jonathan can't come to terms with the sins of his past and lead his new friends to safety... then every boy on the island is doomed.

Dan Gemeinhart's most gripping novel yet, this is a tale of misfits and outcasts at odds and in peril, and a redemption story that shines a light on dark truths to reveal that the strongest prisons of all are the ones we build for ourselves.

Dan Gemeinhart is a teacher-librarian and father of three daughters. His debut novel, The Honest Truth, was a New York Times Editors' Choice selection, an Amazon.com Best Book of the Month, and an Indie Next List pick. His follow-up, Some Kind of Courage, was met with critical acclaim, garnering two starred reviews. Dan lives with his family in Cashmere, Washington. Visit him at dangemeinhart.com.

Praise for The Honest Truth:

A New York Times Editors' Choice selection
An Amazon.com Best Book of the Month
An Indie Next List selection

"An impressive combination of suspenseful adventure thriller and cancer narrative... Touching but unsentimental, this is a deeply moving adventure." -- Booklist


Praise for Some Kind of Courage:

*"This is true adventure with strong underpinnings of moral courage and love... Poignant and real." -- Kirkus Reviews, starred review

*"Exhilarating and enthralling, Courage promises even the most reluctant readers a breakneck adventure that will keep them turning the pages with utter devotion." -- Booklist, starred review

"This is a terrific book, morally thoughtful and wonderfully well told, that 9- to 14-year-olds are likely to cover at a gallop." -- The Wall Street Journal