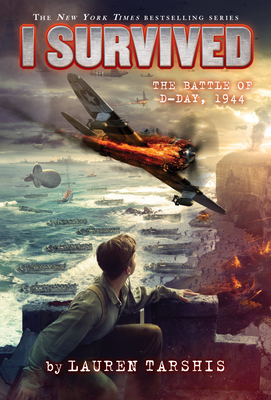 This is book number 18 in the I Survived series.

This installment in the New York Times bestselling I Survived series from Lauren Tarshis shines a spotlight on the Normandy landings, just in time for the 75th anniversary of D-Day!
A battle that would change the course of World War II...
Eleven-year-old Paul's French village has been under Nazi control for years. His Jewish best friend has disappeared. Food is scarce. And there doesn't seem to be anything Paul can do to make things better.
Then Paul finds an American paratrooper in a tree near his home. The soldier says the Allies have a plan to crush the Nazis once and for all. But the soldier needs Paul's help.
This is Paul's chance to make a difference. Soon he finds himself in the midst of the largest invasion in history. Can he do his part to turn horror into hope?

Lauren Tarshis's New York Times bestselling I Survived series tells stories of young people and their resilience and strength in the midst of unimaginable disasters and times of turmoil. Lauren has brought her signature warmth and exhaustive research to topics such as the battle of D-Day, the American Revolution, Hurricane Katrina, the bombing of Pearl Harbor, and other world events. She lives in Connecticut with her family, and can be found online at laurentarshis.com.

Praise for I Survived the American Revolution, 1776:


Praise for I Survived the Destruction of Pompeii, AD 79:

"Tarshis serves up another gripping adventure... with the light-speed pacing and death-defying maneuvering fans have come to expect." -- Booklist


Praise for I Survived the Battle of Gettysburg, 1863:


Praise for I Survived Hurricane Katrina, 2005:

"Expressive illustrations capture the drama of the storm and its aftermath, but the book's real power comes from its exploration of what it means to be a hero." -- Booklist


Praise for I Survived the Shark Attacks of 1916:

"A gripping story that will hold the interest of reluctant readers." -- School Library Journal