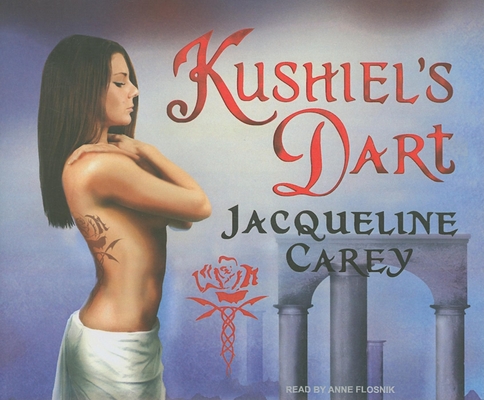 The land of Terre d'Ange is a place of unsurpassing beauty and grace. It is said that angels found the land and saw it was good...and the ensuing race that rose from the seed of angels and men live by one simple rule: Love as thou wilt. Ph dre n Delaunay is a young woman who was born with a scarlet mote in her left eye. Sold into indentured servitude as a child, her bond is purchased by Anafiel Delaunay, a nobleman with very a special mission...and the first one to recognize who and what she is: one pricked by Kushiel's Dart, chosen to forever experience pain and pleasure as one. Ph dre is trained equally in the courtly arts and the talents of the bedchamber but, above all, the ability to observe, remember, and analyze. Almost as talented a spy as she is courtesan, Ph dre stumbles upon a plot that threatens the very foundations of her homeland. Treachery sets her on her path; love and honor goad her further. And in the doing, it will take her to the edge of despair...and beyond. Hateful friend, loving enemy, beloved assassin; they can all wear the same glittering mask in this world, and Ph dre will get but one chance to save all that she holds dear. Set in a world of cunning poets, deadly courtiers, heroic traitors, and a truly Machiavellian villainess, this is a novel of grandeur, luxuriance, sacrifice, betrayal, and deeply laid conspiracies. Not since Dune has there been an epic on the scale of Kushiel's Dart-a massive tale about the violent death of an old age and the birth of a new.

Jacqueline Carey is the author of "Godslayer," "Banewreaker," and the nationally bestselling Kushiel's Legacy series.

Anne Flosnik is an accomplished multi-award-winning British actress who has garnered two "AudioFile" Earphones Awards, an ALA Award, and three Audie Award nominations. Her narration of "Little Bee" by Chris Cleave was chosen as one of the Best Audiobooks of the Year 2009 by "AudioFile" magazine.

"A very sophisticated fantasy, intricately plotted and a fascinating [book]." ---Robert Jordan, author of the Wheel of Time series