Unto the Breach (Hardcover) 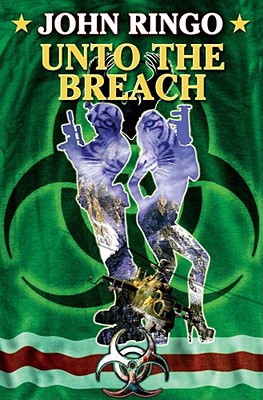 By John Ringo
Email or call for price.
Special Order

Sequel to Ghost, Kildar and Choosers of the Slain.
Michael Harmon has been there and done that. Rescued co-eds, killed major terrorists, stopped nuclear assaults. Now he'd just like to kick back and relax with his harem of lovelies. Unfortunately, the world keeps turning. Mike and the Keldara are back tracking down terrorists, rogue Russian bio-scientists and the doomsday weapon to end all doomsday weapons. It's going to take some very tough, hard and nasty people to stop the end of the world. Fortunately, there's Mike Harmon. The Hero of Ghost, Kildar and Choosers of the Slain, along with his company of elite mountain fighters, is sent on a mission to stop an advanced smallpox plague from being turned over to terrorists. But that will only be the beginning as the Kildar and his Keldara rush to stop a host of WMD attacks, coordinated to take out the very heartland of terrorism's enemies. It's a battle for culture, and this time the terrorists aren't aiming at just one building. . . .

John Ringo brings fighting to life. He is the creator of the Posleen Wars series, which has become a New York Times best-selling series with over one million copies in print. The series contains A Hymn Before Battle, Gust Front, When the Devil Dances, Hell’s Faire, and Eye of the Storm. In addition, Ringo has penned the Council War series. Adding another dimension to his skills, Ringo created nationally best-selling techno-thriller novels about Mike Harmon (Ghost, Kildar, Choosers of the Slain, Unto the Breach, A Deeper Blue, and, with Ryan Sear, Tiger by the Tail). His techno-thriller The Last Centurion was also a national bestseller. A more playful twist on the future is found in novels of the Looking-Glass series: Into the Looking Glass, Vorpal Blade, Manxome Foe, and Claws That Catch, the last three in collaboration with Travis S. Taylor. His audience was further enhanced with four collaborations with fellow New York Times best-selling author David Weber: March Upcountry, March to the Sea, March to the Stars and We Few. There are an additional seven collaborations from the Posleen series: The Hero, written with Michael Z. Williamson, Watch on the Rhine, Yellow Eyes and The Tuloriad, all written with Tom Kratman, and the New York Times bestseller Cally’s War and its sequels Sister Time and Honor of the Clan, all with Julie Cochrane. His science-based zombie apocalypse Black Tide Rising series includes Under a Graveyard Sky, To Sail a Darkling Sea, Islands of Rage and Hope and Strands of Sorrow. A veteran of the 82nd Airborne, Ringo brings first-hand knowledge of military operations to his fiction.