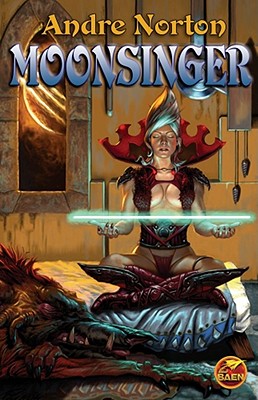 Moon of Three Rings: It is the time of the Moon of the Three Rings when the Free Trader ship Lydis lands on the primitive world of Yiktor, a world the Combine was seeking to control for the power the Three Rings would bring them. The life of a Free Trader was all junior crew member Krip Vorlund knew. That life ended at a beast show on Yiktor when Vorlund was strangely attracted to the owner of the show animals, a delicate and mysterious woman named Maelen. Too soon Vorlund learned the nature of Maelen's sorcery, too soon he is caught up in the struggle over the fate of a world.... But his soul would remain his own.
Exiles of the Stars: The galactic trade ship Lydis is making a run to the planet Thoth when a civil war lands her in a battle of ancient powers and nameless evil, with a Forerunner treasure at its heart. The crew seems normal-until you look closely at two of its members: Krip Vorlund, a man who walks in a body not his own, and his pet, a four-legged beast hiding the mind of Maelen the Moon Singer, a woman whose esper powers can save them all-or bring them to eternal destruction. Publisher's Note: Moonsinger has appeared separately as Moon of Three Rings, and its sequel, Exiles of the Stars. This is the first time the complete saga has appeared in one volume.

Called a superb talent by The New York Times, Andre Norton was a legend in science fiction, and one of our greatest storytellers. Many of today's top writers, including David Weber, Eric Flint, C.J. Cherryh and Joan D. Vinge, have cited her as a primary influence on their own work. She was Guest of Honor at the 1989 World Science Fiction Convention, and has received the Grand Master award from the Science Fiction Writers of America and the Lifetime Achievement Award of the World Fantasy Convention. She was astoundingly prolific, with over thirty books in her celebrated and popular Witch World series alone. She introduced three generations of SF readers to SF and fantasy, both through her critically acclaimed YA novels and her adult works, and was one of the most popular authors in both fields.