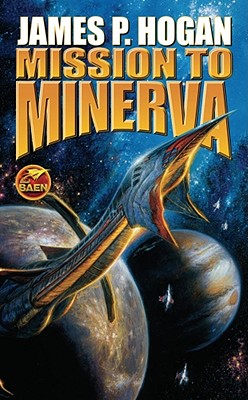 This is book number 5 in the Giants series.

Earth is adapting to a future of amicable coexistence with the advanced aliens from Thurien, descended from ancestors who once inhabited Minerva, a vanished planet of the Solar System. The plans of the distantly related humans on the rogue world Jevlen to eliminate their ancient Terran rivals and take over the Thurien system of worlds have been thwarted, but the mystery remains of how it was possible for the fleeing Jevlenese leaders to have been flung back across space and time to reappear at Minerva before the time of its destruction. Victor Hunt and a group of his colleagues travel to Thurien to conduct a joint investigation with the alien scientists into the strange physics of interconnectedness between the countless alternate universes that constitute ultimate reality. When their discoveries lead first to bizarre communication with bewildered counterparts in other universes, and thence to the possibility of physical travel, the notion is conceived of sending a mission back to the former world of Minerva with the startling objective of creating a new family of realities in which its destruction is avoided. But Imares Broghuilio, the deposed Jevlenese leader, along with several thousand dedicated followers with five heavily armed starships, are already there. And they have a score to settle.

James P. Hogan is a science fiction writer in the grand tradition, combining informed and accurate speculation from the cutting edge of science and technology with suspenseful story-telling and living, breathing characters. His first novel was greeted by Isaac Asimov with the rave, ¿Pure science fiction . . . Arthur Clarke, move over!¿ and his subsequent work quickly consolidated his reputation as a major SF author. He has written nearly twenty novels including Cradle of Saturn and Bug Park (both Baen), the Giants series (Del Rey), the New York Times bestsellers The Proteus Operation and Endgame Enigma and the Prometheus Award Winner The Multiplex Man.