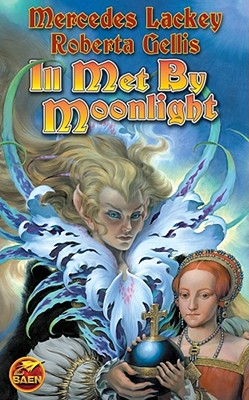 England in the sixteenth century: a nation at a fatal fork in time, leading to two possible futures forseen by the Sidhe of Elfhame Avalon. Either an evil queen will join forces with the Inquisition and rule with a blood-spattered iron hand, threatening humans and elves alike¿or a benevolent, red-haired queen named Elizabeth will rule wisely and well. But the evil Unseleighe Sidhe, who feed on human suffering and dark emotions, are determined that the little girl Elizabeth shall never grow up to take the throne. Opposing them are the good Sidhe of elfland, who have so far managed to protect the young girl. Denoriel had foiled one attempt to kidnap both Elizabeth and her half-brother and replace them with changelings, almost at the cost of his own life. But a few years have passed, and Denoriel has healed and returned to guard the young princess, now all of eight years old, secure in the knowledge that his enemy Vidal, leader of the evil Unseleighe, is dead, killed with an iron bolt fired from a primitive gun. Unfortunately, he is wrong: Vidal¿s armor was far stronger than any of the good elves realized. Though the wound was deep and Vidal was forced to bide his time in his own slow healing, his recovery is complete, his determination to hurl England into a new dark age is as strong as ever, and he has set in motion a plan to achieve this end of which Denoriel and his comrades are dangerously unaware. . . .

Mercedes Lackey is the author of the Bardic Voices series and the SERRAted Edge series (both Baen), the Heralds of Valdemar series (DAW), and many more. Of her writing, Stephen King has stated, ¿She¿ll keep you up long past your bedtime,¿ and Locus raved, ¿Lackey is one of the best storytellers in the field.¿ Among her popular Baen titles are The Fire Rose, The Lark and the Wren, The Shadow of the Lion (with Eric Flint and Dave Freer) and This Scepter¿d Isle, the prequel to Ill Met by Moonlight, written in collaboration with Roberta Gellis. She lives in Oklahoma.

Roberta Gellis is author of over 25 novels in different fields. New York Times best-selling author John Jakes has called her ¿a superb storyteller of extraordinary talent,¿ Publishers Weekly has termed her ¿a master of the medieval historical,¿ and Romantic Times has praised her as ¿a master spinner of tales.¿ Her many awards include: The Silver and Gold Medal Porgy for historical novels from West Coast Review of Books and the Golden Certificate and Golden Pen from Affaire de Coeur. From Romantic Times she has received both the Award for Best Novel in the Medieval Period and also the Lifetime Achievement Award for Historical Fantasy. And the Romance Writers of America have presented her with their Lifetime Achievement Award..