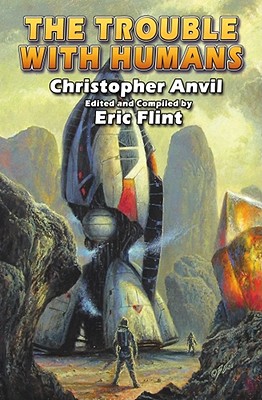 This is book number 5 in the Complete Christopher Anvil series.

Humans--there's no understanding them, and no dealing with them either. Or even their planet. Pity the poor aliens, whose shape-changing ability should let them take over the planet Earth before the humans even know they're there--if it weren't for all that omnipresent pollution. Or consider another set of invaders, from a planet where the weather is always mild and the changing of the seasons is hardly noticeable. They land in force and their weapons are more powerful than those of the primitive humans--but they've never before had to deal with below-zero temperatures, flash floods or tornados--not to mention volcanoes. Then there were the aliens who noticed how belligerent humans were, and gave them the "gift" of TV-like devices which would show anything anywhere on Earth, which was sure to lead to war. Imagine how surprised the aliens were when the humans took the gadgets apart, improved them, and started spying on everything the aliens were up to, all over the galaxy. Humans don't make sense, they don't fight fair, and they're making aliens throughout interstellar space think seriously about pulling up stakes and moving to another galaxy.

For two decades, Christopher Anvil had numerous stories in the leading science fiction magazines, and was a frequent and popular contributor to the leading magazine, Analog, where he consistently ranked high in the reader's polls, and had several stories nominated for Hugo and Nebula awards. Like Keith Laumer, he has a rare ability to combine fast-moving adventure with wry humor. His previous books for Baen were Pandora's Legions, Interstellar Patrol, Interstellar Patrol II: The Federation of Humanity, and The Trouble with Aliens. His other novels include Strangers in Paradise; Warlord's World; The Steel, the Mist, and the Blazing Sun; and The Day the Machines Stopped.