Blood of the Heroes (Mass Market) 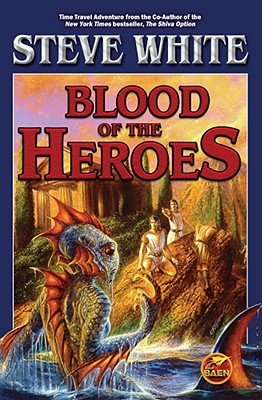 Jason Thanou of the Temporal Regulatory Authority had about had it with nursemaiding parties of ivory-tower academics through Earth’s blood-drenched history, keeping them alive as they sought evidence for their pet theories. Of course, when one of the ivory-tower academics looked like Doctor Deirdre Sadaka-Ramirez, one last expedition didn’t look like such a bad idea after all.. . . Besides, there was something to be said for witnessing the Santorini explosion of 1628 B.C.—the most cataclysmic natural disaster of human history, and the source of much of the mythology of Jason’s own Greek ancestors. But once Jason and his companions were in the Aegean Bronze Age, unable to return to their own twenty-fourth-century time until a predetermined instant, they would find that there was more to those old legends of gods and heroes than anyone had imagined. For the gods were very real—horribly so. And dealing with them took very real heroes.


Steve White completed a tour of duty in Vietnam as a Naval officer. His SF adventure trilogy for Baen comprising The Disinherited, Legacy, and Debt of Ages was highly successful, as was Prince of Sunset, and its sequel Emperor of Dawn. With David Weber, he has collaborated on Insurrection, Crusade, In Death Ground, and the New York Times best seller The Shiva Option. His recent books for Baen include Forge of the Titans and The Prometheus Project.