The Best of Jim Baen's Universe I (Mass Market Paperbound) 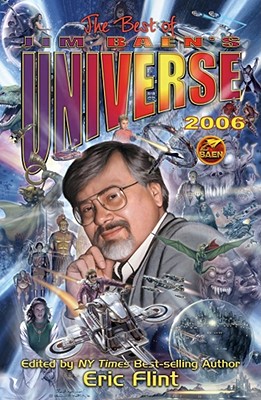 Top-selling established writers and brilliant newcomers both appear regularly in the online magazine, Jim Baen's Universe, edited by Eric Flint, creator of the New York Times best-selling "Ring of Fire" series. Now, editor Flint selects a generous serving of the best science fiction and fantasy stories that have appeared in the magazine. Hugo and Nebula Award winners such as Mike Resnick and Gene Wolfe are on board, and so are best-selling writers David Drake, Gregory Benford, Esther Friesner and more. Jim Baen's Universe is already a resounding hit on the internet, and is certain to be equally popular in the uncybernetic realm of paper reading as well.

Eric Flint, editor of the online magazine, Jim Baen's Universe, is the New York Times best-selling author of the Ring of Fire alternate history series, the first of which is 1632. His impressive first novel, Mother of Demons (Baen), was selected by Science Fiction Chronicle as one of the best novels of 1997. With David Drake he has written six popular novels in the Belisarius series, including the new novel The Dance of Time, and with David Weber collaborated on 1633, a novel in the Ring of Fire series, and on Crown of Slaves, a best of the year pick by Publishers Weekly. Flint received his masters degree in history from UCLA and was for many years a labor union activist. He lives in East Chicago, IL, with his wife and is working on more books in his New York Times best-selling Ring of Fire series