We the Underpeople (Mass Market Paperbound) 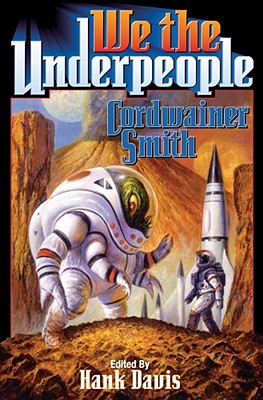 In a far-flung future, planoforming ships knit together a galaxy ruled from Earth by the ruthless benevolence of the mysterious Lords of the Instrumentality, who presided over a utopia without death, danger--or freedom. The Underpeople, humanlike beings created from animals to do the work of utopia, had no rights, and could be disposed of at the whim of a human. But they had become more humanlike than their creators, and their leader, the cat woman C'Mell, had a plan for gaining their freedom--which made her much too dangerous a person to be permitted to live. Elsewhere in the galaxy, the planet Norstrilia had power of its own, for it was the only source of stroon, the drug which arrested aging and made humans immortal. Its inhabitants were wealthy beyond comprehension, and one of them, a boy named Rod McBan, with the help of his computer, had manipulated the galactic economy until he completely owned the planet Earth--which made him much too dangerous a person to be permitted to live. But when Rod came to Earth and joined forces with C'Mell and the Underpeople, the petrified utopia of the Instrumentality began to crack and fall apart as freedom was reborn in the galaxy. . . .

Cordwainer Smith was the pseudonym under which Dr. Paul Linebarger wrote science fiction. His first story, "Scanners Live in Vain," appeared in 1950 and rocked the science fiction world as few first stories have. He was born in Milwaukee, and grew up in Japan, China (where he became the godson of Sun Yat-Sen, then president of China), France and Germany. He was a Professor of Asiatic Studies at Johns Hopkins University, was on the U.S. Operations, Planning and Intelligence Board during World War II, and became a Colonel in Army Intelligence. After the war, he was advisor to the British forces in Malaya and to the U.S. Eighth Army in Korea, and wrote the book Psychological Warfare, regarded for decades after as the most authoritative text in the field. He died in 1966.