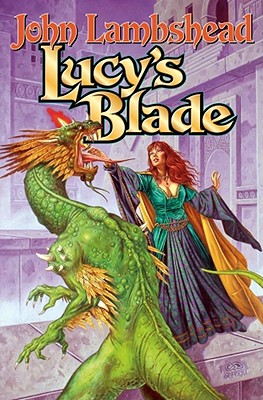 1.  A stunningly original novel from a new author set in one of the pivotal and most interesting periods of western history that combines science fiction, espionage and magic in a new mix.  Buffy has a new rival from Olde Englande.

2.  This science fantasy novel is set within an accurately described Elizabethan England - with a young girl who fights the forces of evil for the Queen's Secret Service.  Buffy fans who have been suffering withdrawal symptoms will flock to this new demon-kicking heroine.

Sir Francis Walsingham, Queen Elizabeth’s Secretary of State, was the greatest spymaster the world had ever seen. But when he asked Dr. Dee to summon a demon the result was unexpected, especially for his orphaned niece Lucy. Sir Francis’ duty as her guardian was to find Lucy a suitably aristocratic husband, not to let her fight demons and witchcraft for the Queen’s Secret Service. But his—and Lucy’s—duty to protect Queen and country from enemies both natural and supernatural kept getting in the way. And so did all those demons . . .

Dr. John Lambshead is senior research scientist in marine biodiversity at the Natural History Museum, London. He is also the Visiting Chair at Southampton University, Oceanography, and Regent’s Lecturer, University of California. He has authored almost a hundred academic/scientific publications. In their special 2000 millennium edition, London’s Evening Standard newspaper nominated him as one of London’s top 100 “unknown thinkers” for his scientific research.  He has kept sane by writing military history books and designing computer and fantasy games, and designed the world’s first icon-driven game, based on Frederick Forsyth’s movie, The Fourth Protocol. He is married, lives in Kent in southern England, and is putting two daughters through university, so he really needs you to go out and buy his books.