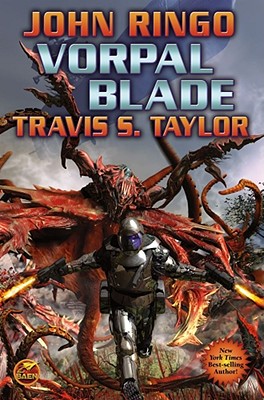 This is book number 2 in the Looking Glass series.

3.  The first novel in his Posleem War series, A Hymn Before Battle has an 81% sell through in mass market from October 2001 to date.  Booklist called the novel, "practically impossible not to read in one sitting."  Gust Front, the second novel in the series, has equally high sell throughs in both hardcover and mass market.

4.  A veteran of the 82nd Airborne, Rindo brings military characters and their explosive battles to vivid, three-dimensional life.

5.  Travis S. Taylor's science background and profound knowledge compliment Ringo's military realism with scientific realism, filling the novel with breakthroughs and theories from the frontiers of today's science, as he did in The Quantum Connection, praises by Publishers Weekly as "dazzling...cutting-edge scientific possibilities...stimulating and satisfying..."

10.  Teaser chapter for Claws That Catch

The sequel to Into the Looking Glass. William Weaver, PhD. and SEAL Chief Miller are back and Bill got himself a ship! The former SSBN Nebraska has been converted, using mostly garage mechanics and baling wire, into a warp ship ready to go "out there." But as everyone knows, the people who really are going to bear the brunt are the poor Security guys, Force Recon Marines who are kept in the dark and fed manure all day. That is until they land on an alien planet, get partially wiped out and then load back up again.

Ranging in topics from the best gun to kill armored space monsters to particle physics to cosmology to health and beauty tips, Vorpal Blade is a return to the "good old days" of SF when the science problems were intractable and the beasts were ugly. The monkeys are out in the space lanes and ready to rock. As soon as they get another roll of duct tape.