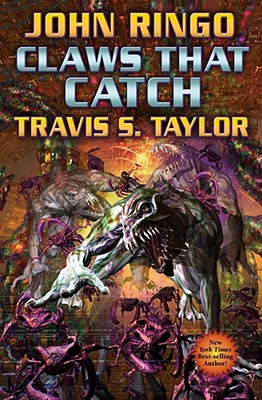 This is book number 4 in the Looking Glass series.

3.  The first novel in his Posleen War series, A Hymn Before Battle, was praised by Booklist as "practically impossible not to read in one sitting."  Gust Front, the second novel in the series, has an 85% sell through in hardcover and currently has an 82% sell through in mass market.

4.  A veteran of the 82nd Airborne, Ringo brings military characters and their explosive battles to vivid, three-dimensional life.

5.  Travis S. Taylor's science background and profound knowledge complement Ringo's military realism with scientific realism, filling the novel with breakthroughs and theories from the frontier's of today's science, as he did in The Quantum Connection, praises by Publisher's Weekly as "dazzling...cutting-edge scientific possibilities...stimulating and satisfying..."

13.  Teaser chapter in the mass market of Vorpal Blade

Working off of a piece of intelligence from the alien Hexosehr, the Vorpal Blade is dispatched to investigate rumors of an ancient and powerful civilization that may have been the creators of the “black box” that drives humanity's only space ship. Any remnant technology would be nice but what the Blade finds is much more than they bargained for. Worse, the ship is infested by an alien species of scorpion-like arachnoids that has the potential to wipe out a world. Worst of all, instead of being Astrogator, Captain William Weaver is now the XO and he is not getting along with the new commander. And the new commander does not get along with Weaver, the ship's female savant-linguist or most of the rest of the original crew. And what is that weird noise the ship makes every time it's in hard maneuvers?

Leave it to the oddball geniuses of the Blade to sort it all out. And the Dreen are not going to like the answers.