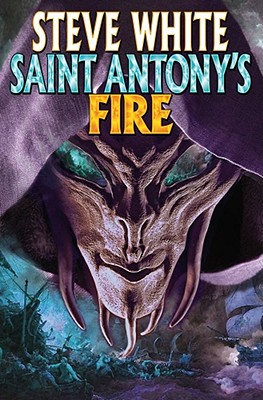 By Steve White
Email or call for price.
Special Order

In our universe, Ponce de León is remembered for his fruitless search for the mythical fountain of youth. But, in an alternate universe, his quest found something very different—and very dangerous. After his return to Spain, bizarre rumors flew about what he had found there, and what had come back with him.

Eighty-five years later, Spain sent a fleet of ships against England. The English were confident that they could repel the threat—but England’s fleet was annihilated by weapons shooting beams of fiery light, weapons which seemed to employ the blackest of sorcery, even if they were wielded by odd-looking beings in monk’s garb.

The Queen herself was forced to flee to the New World on Captain Thomas Winslow’s ship, Heron, accompanied by her advisor Dr. Dee, whom some called a sorcerer, and an odd fellow named Shakespeare, hoping there to find the source of Spain’s powerful weapons. But they would find far stranger matters there than they had expected, such as a grown woman who had been only an infant a year before, and eerie tales of a gate to another world with beings who were not human . . .