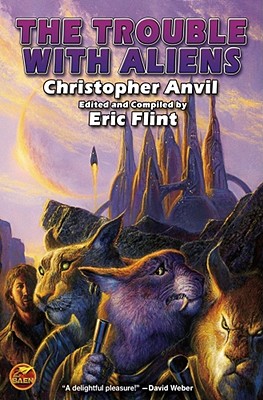 This is book number 4 in the Complete Christopher Anvil series.

2.  Like Keith Laumer, Anvil has a rare ability to combine fast-moving adventure with humor, deftly skewering the bureaucratic mind, whether human or alien.

3.  Anyone who likes sardonic space adventure with a dash of satire will enjoy Christopher Anvil, such as readers of Eric Flint, Lois McMaster Bujold and Keith Laumer.

Humans on the space frontiers may have enough problems with befuddled bureaucrats, rules that don’t fit the realities of very dangerous situations, and general rear-echelon incompetence without bringing in unfriendly aliens, but it’s that kind of universe. On the other hand, as master satirist Christopher Anvil makes clear, the aliens are anything but omnipotent and have plenty of problems of their own.

Here for the first time the stories and short novels of the war with the Outs are collected into a novel-length chronicle. The Outs had mental powers they could use to make humans see illusions and convince them to change sides. Obviously, they were unbeatable—until some troublesome humans found their Achille’s heel.

These and other stories of human/alien conflict fill this large volume by the master of wryly sardonic science fiction adventure.