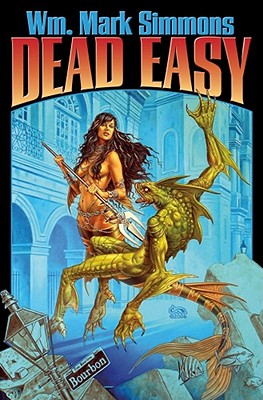 This is book number 4 in the Halflife Chronicles series.

1.  Urban Fantasy is a hot category, and this one has lots of undead action plus a generous dose of humor and will appeal to readers of Mercedes Lackey, Terry Pratchett, and Piers Anthony.

4.  One Foot in the Grave, to which Habeas Corpses is a sequel, was strongly praised by the British Fantasy Association Newsletter ("One of the best novels in years... you've got to read this, it's a hoot!") and Dragon ("Simmons rarely let the pace drop below a brisk gallop.")

5.  Advertising in Locus and more

What do you get when you mix a squid-headed Ancient One, a mystical force-five hurricane, Rasputin’s privates, the city of New Orleans, and an undead Captain Nemo?  Christopher Cséjthe, the reluctant hero stuck halfway between being undead and alive, is back, and is going to find out, whether he wants to or not.

But now he’s in for an underwater Mardi Gras of epic proportions complete with an army of drowned vampire zombies. Not to mention a Lovecraftian take on Gidget and The Creature From The Black Lagoon. Many brave hearts are asleep in the deep, and Christopher may be about to join them. . . .

Wm. Mark Simmons is the author of seven novels and one novella.  His first book, In The Net of Dreams, was a finalist for the Compton Crook Award and made the Locus "Best" list in 1991. For Baen, he inaugurated a new fantasy series, which began with One Foot in the Grave, followed by Dead on My Feet, Habeas Corpses, and now Dead Easy. Simmons has worked as a teacher, actor, director, musician, and entertainer, hosting his own shows on both television and radio while winning awards as a journalist and copywriter.  As a professional broadcaster, he has held management positions in both the public and private sectors and currently serves as the Classical Music Director and morning host for the Radio Kansas Network.