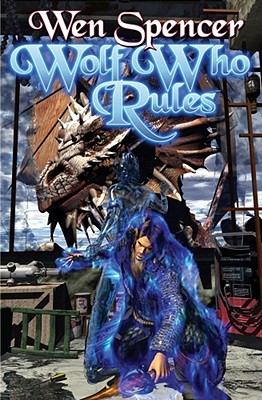 The popular fantasy novel Tinker introduced the inventor-heroine of the same name, who lives in a near-future Pittsburgh, which shares an interdimensional border with the land of the elves. In this sequel, Wolf Who Rules, the elven noble whose destiny is intertwined with Tinker, finds himself besieged from all sides. Viceroy and head of the Wind Clan, he had been able to guarantee the safety of everyone in his realm, but faced with an oni invasion, he has had to call in royal troops and relinquish his monopoly of Pittsburgh, which is now entirely stranded on Elfhome. He now struggles to keep the peace between the humans, the newly arrived Stone Clan, the royal forces, a set of oni dragons, the half-oni children who see themselves as human, and the tengu trying to escape their oni enslavement. Meanwhile, Tinker strives to solve the mystery of a growing discontinuity in Turtle Creek. She's plagued with inexplicable nightmares that may hold the keys to Pittsburgh's future. The only clue from the Queen's oracle to help Tinker is a note with five English words on it: Follow the Yellow Brick Road. Oni, and dragons and tengu -- oh my!

The 2003 John Campbell Award Winner, Wen Spencer spent twenty years living in Pittsburgh, so its only natural that she sets her stories there. Currently she's living outside of Boston with her husband and son. She's a fan of Japanese anime and manga, and it flavors her writing. Tinker, prequel to Wolf Who Rules, won the 2003 Sapphire Award and was nominated for the Romantic Times Review Choice Award for Best Fantasy. Anne McCaffery has listed Wen on her website as one of two recommended authors.