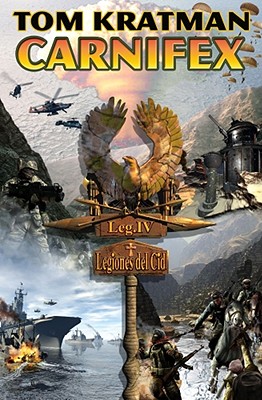 Revenge: it won't bring your wife and kids back, but it might help with the nightmares.
Patricio Carrera has been waging what amounts to a private world war to bring to justice the murderers of his family. He's raised an army and air force and used them. He's raised a fleet and he's about to use that. He's suborned one republic and is about to undermine another. He's tracked his enemies across half a world, breaking, in the process, any notion of international law that stood in his way.
Now he's deployed his legions to Pashtia, penultimate hideout of the Salafi Ikhwan who have made him what he has become. But with each step further from his home, revenge seems no closer. And with each step he leaves behind him a little of his dwindling humanity.
Revenge is a dish best served cold. Yet the trail itself grows cold, as cold as the snow-capped, windswept mountains of Pashtia. Only Carrera's hate still burns hot, and that's a fire that is slowly consuming him.

Tom Kratman, in 1974 at age seventeen, became a political refugee and defector from the PRM (People's Republic of Massachusetts) by virtue of joining the Regular Army. He stayed a Regular Army infantryman most of his adult life, returning to Massachusetts as an unofficial dissident while attending Boston College after his first hitch. Tom is currently an attorney practicing in southwest Virginia. Baen published his first novel, A State of Disobedience and two collaborations with John Ringo in the Posleen War series, Watch on the Rhine and Yellow Eyes.