Storm from the Shadows (Hardcover) 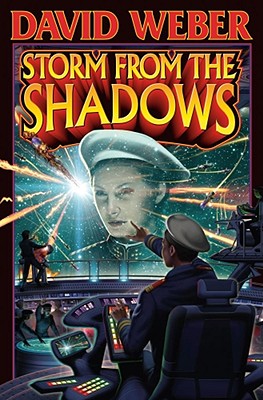 2.       There are over three million copies in print of his New York Times best-selling Honor Harrington series

12.   Teaser chapter in  all Baen mass markets for January, February, and March

Rear Admiral Michelle Henke was commanding one of the ships in a force led by Honor Harrington in an all-out space battle. The odds were against the Star Kingdom forces, and they had to run. But Michelle’s ship was crippled, and had to be destroyed to prevent superior Manticoran technology from falling into Havenite hands, and she and her surviving crew were taken prisoner. Much to her surprise, she was repatriated to Manticore, carrying a request for a summit conference between the leaders of the two sides which might end the war. But a condition of her return was that she gave her parole not to fight against the forces of the Republic of Haven until she had been officially exchanged for a Havenite prisoner of war, so she was given a command far away from the war’s battle lines. What she didn’t realize was that she would find herself on a collision course, not with a hostile government, but with the interstellar syndicate of criminals known as Manpower. And Manpower had its own plans for eliminating Manticore as a possible threat to its lucrative slave trade, deadly plans which remain hidden in the shadows.

Praise for the Prequel, The Shadow of Saganami:

“These hugely entertaining and clever adventures are the very epitome of space opera. . . . Weber . . . remind[s] the reader that a hero can be anyone who does his or her job with honor, commitment and skill.” —Publishers Weekly

“The Shadow of Saganami may be military science fiction great David Weber’s best tale in the Honorverse . . an action packed tale with a fully developed multiple cast. . . .” —The Midwest Book Review