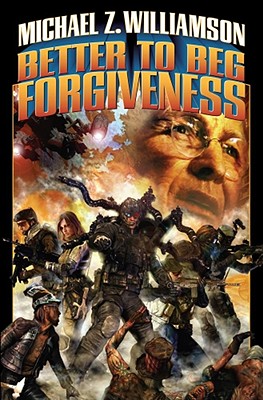 2.       Williamson will appeal to the huge audiences of David Drake and John Ringo.

3.       Williamson’s military experience gives him the background and first-hand knowledge to bring an adventure yarn to vivid life and keep it moving at a breakneck pace.

6.       Contains teaser chapters from new Williamson hardcover and from David Weber’s Storm from the Shadows.

Celadon, a poor nation on a poor planet, engaged in civil war and a haven for every type of villainy in space, is ripe for cleanup. The military could pacify it handily, but it would take a statesman to fix it. But some statesmen have ethics, which politicians and megacorps find inconvenient. President Bishwanath compounded the sin by being astute, ambitious and capable. Something had to be done, because a working nation isn't much use for pork and graft.

When the word comes down that he is dead, the politicians move on with a new plan, re-allocating resources, and finding a new, more pliable president to put in place.

There are three problems with this solution. Bishwanath is not dead. His mercenary bodyguards are more loyal than the politicians. And if they're not on contract, there are no rules.

Michael Z. Williamson was born in Birkenhead, England and raised in Liverpool, and Toronto, Canada, before moving to Columbus, Ohio. An 18-year veteran of the US Army and US Air Force, he is a state-ranked competitive shooter in combat rifle and combat pistol. His other books include Freehold (Baen), the Target Terror series for Harper-Collins, so far including Targets of Opportunity and The Scope of Justice, and Hero, a collaboration with New York Times best-selling author John Ringo for Baen. He currently lives in Indianapolis with his wife Gail, their two children, and various cats that are not to be trusted.