When the Tide Rises (Mass Market) 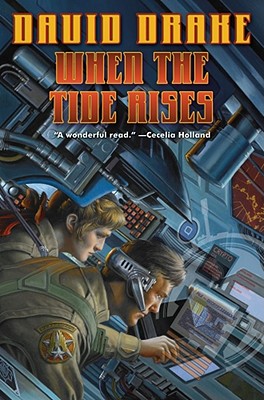 1.       Vietnam veteran David Drake tells a military story like no other writer. His bestselling Hammer’s Slammers series set the standard for military science fiction, with his gritty and realistic look at hard-bitten mercenaries, getting the job done, no matter what it takes.

2.       His novels of the military exploits of the brilliant Lieutenant—now Commander—Leary and his indispensable aide, the skilled and deadly officer Adele Mundy, have been hugely popular, and appeal strongly to the audience for David Weber’s best-selling Honor Harrington novels.

When the Republic of Cinnabar doesn't have enough battleships to deal with all the crises in its war with the Alliance, it sends the next best thing: Commander Daniel Leary and his friend, the spy Adele Mundy. This time they're off to help the Bagarian cluster in its rebellion against the Alliance, but they'll quickly find that the worst threats to the rebels are the treacherous politicians

Leary and Mundy use electronic espionage, sub-machine guns, and shipkilling missiles to outwit political rivals, put down mutiny, and capture an Alliance fortress. When all else fails, they'll strike for the heart of the Alliance--and then throw their tiny corvette into a major fleet action.

A cascade of non-stop action as vivid as only David Drake can write it!

David Drake was attending Duke University Law School when he was drafted. He served the next two years in the Army, spending 1970 as an enlisted interrogator with the 11th armored Cavalry in Viet Nam and Cambodia. Upon return he completed his law degree at Duke and was for eight years Assistant Town Attorney for Chapel Hill, North Carolina. He has been a full-time freelance writer since 1981. Besides the bestselling Hammer’s Slammers series, his books for Baen include Ranks of Bronze, All the Way to the Gallows, Redliners, and many more. His “Lord of the Isles” fantasy novels for Tor are genre best sellers. Some Golden Harbor is the sixth novel in the popular RCN series. The previous titles are: With the Lightnings; Lt. Leary, Commanding; The Far Side of the Stars; The Way to Glory and Some Golden Harbor. The next in the series, In the Stormy Red Sky, is coming in May 2009.