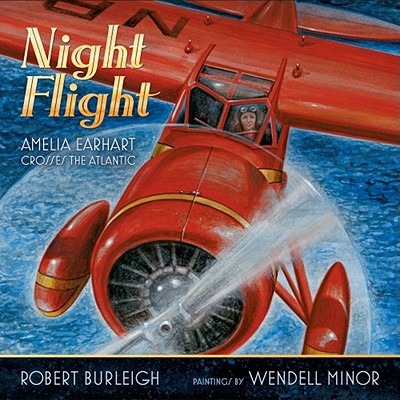 Award-winning author Robert Burleigh has captured Amelia Earhart's first solo flight across the Atlantic in 1932. She was only the second person to do this – and the first woman. Rich in detail, feeling and incident this is nonfiction with edge and action, a you-are-there experience made more dramatic and real by Wendell Minor's vivid paintings.

Robert Burleigh is the award-winning author of many books for children, including The Adventures of Mark Twain by Huckleberry Finn, illustrated by Barry Blitt; Night Flight, illustrated by Wendell Minor; Black Whiteness, illustrated by Walter Lyon Krudop; and Sylvia’s Bookshop, illustrated by Katy Wu. His many other books include Hoops; Stealing Home; and Clang! Clang! Beep! Beep! He lives in Michigan.

Wendell Minor has illustrated dozens of picture books, and his work has won countless awards and is in permanent collections of such institutions as the Museum of American Illustration and the Library of Congress. His cover illustrations have graced some of the most significant novels of our time by authors such as Toni Morrison, David McCullough, and James Michener. He lives in Washington, Connecticut. Visit him online at MinorArt.com.

A gripping narrative and dynamic art immediately pull readers into the story of Earhart's historic 1932 solo transatlantic flight. Urgent yet lyrical, Burleigh's (One Giant Leap) account opens with Earhart's takeoff: "It is here: the hour, the very minute. Go!" A clear sky darkens as a storm erupts and lightning "scribbles its zigzag warning across the sky: danger." Earhart must also contend with mechanical difficulties--a broken altimeter, a cracked exhaust pipe, a gas leak. The tension reaches a crescendo as ice on the wings causes Earhart to lose control of the plane: "Everything she has ever learned courses through her blood. Now or never. All or nothing." Minor's (The Last Train) gouache and watercolor paintings easily convey the journey's intense drama, balancing lifelike closeups of Earhart with images of her imperiled plane. Stunning skyscapes are suffused with shadow and light; a breathtaking spread reveals streaks of multicolored clouds at daybreak as "Splinters of sunlight stab down through cloud slits and brace themselves on the vault of the open sea." Hearts will be racing. Back matter includes notes on Earhart's life. - PUBLISHERS WEEKLY, December 20, 2010, *STAR

A worthy new addition to the recent spate of books about the famous aviatrix, Burleigh’s story
concentrates on Earhart’s 1932 solo flight from Newfoundland to Ireland, placing compelling poetic
emphasis on her single-hearted struggle. “Why? Because ‘women must try to do things as men have
tried,’” writes Burleigh, quoting Earhart. Terse two-sentence stanzas tell a story focused upon the flight’s
trials: a sudden storm (“the sky unlocks”), ice buildup on the plane’s wings, a precipitous plunge toward
the Atlantic’s frothing surface, and a cracked exhaust pipe (“The friendly night becomes a graph of fear”).
The loneliness of the effort is finally relieved over a farmer’s field, where Amelia lands and says, “Hi, I’ve
come from America.” Minor’s illustrations maintain tension by alternating between cockpit close-ups and wide views of the plane crossing the foreboding ocean. Predominant reds and blues convey the pure excitement of the nail-biting journey. An afterword, along with Internet resources, a bibliography, and a column of Earhart quotes, increases the book’s value for curious children who might want more. Finally, Minor’s endpapers, with a well-drawn map and mechanical illustration of the plane Earhart called the“little red bus,” also work to inspire further learning.
— Karen Cruze

BURLEIGH, Robert. Night Flight: Amelia Earhart Crosses the Atlantic. illus. by Wendell Minor. 40p. bibliog. Web sites. CIP. S & S/Paula Wiseman Bks. Feb. 2011. Tr $16.99. ISBN 978-1-4169-6733-0. LC 2008052269.
Gr 2-5–On a May evening in 1932, Amelia Earhart climbed into her single-engine, red Lockheed Vega and flew across the ocean, departing from Newfoundland and landing on a farm in Northern Ireland. Burleigh’s suspenseful text and Minor’s shifting perspectives work in tandem to pull readers into the drama as they experience the anxiety and exhilaration that accompanied this historic flight. Earhart’s skill, stamina, and courage are put to the test when a thunderstorm erupts, her altimeter breaks, and icy wings cause the plane to plummet. She faces the “Hour of white knuckles....Hour of maybe–and maybe not.” The third-person narrative is arranged in two-line stanzas of free verse; the language is fresh and evocative, morphing to match the mood–by turns terse, lyrical, relentless. Minor’s gouache and watercolor scenes pull back from intense close-ups and cockpit perspectives to sweeping panoramic vistas, his fluid brushwork a perfect match for a tale of sea and sky. This book will encourage children to consider the inner resources required to undertake such a feat when pilots had only themselves to rely on–in this case, traversing 2000 miles without the security of land. Back matter includes a technical note, bibliography, and inspirational quotes from Earhart’s writings. Endpapers depict a map of the flight and a rendering of the plane. Pair this with Nikki Grimes’s Talkin’ About Bessie (Scholastic, 2002) to present another female aviator who experienced the pleasures and perils of being a pioneer.–Wendy Lukehart, Washington DC Public Library

Noted picture-book biographer Burleigh here turns his attention to legendary aviator Amelia Earhart, tracing her 1932 solo transatlantic flight, the first such by a woman. Present-tense third-person narration follows Earhart from her sunset takeoff from Newfoundland through her storm-wracked fourteen-hour crossing to her safe landing in Ireland. Burleigh’s lyrical language (“Rivers of quicksilver darkness drown the moon”) is even more figurative than in his biographies of Tenzing Norgay (Tiger of the Snows, BCCB 6/06) and Admiral Byrd (Black Whiteness, BCCB 2/98), but there’s plenty of concrete detail from Earhart’s life and words, and it’s an effective combination for evoking the strange, risky experience of Earhart’s flight. Minor favors warm tones in his gouache-and-watercolor illustrations, making the most of Earhart’s ruby-red plane against the gloom of night (there’s even an illustrator’s note about later modifications to the plane) in creatively varied perspectives. In fact, so many of the shots are external, focusing on the plane’s details, that the visuals are oddly impersonal partners for the intimate individuality of the text; the few views of Earhart herself (almost always through the windshield) effectively capture her determination without glamorizing her. This could be a dramatic readaloud as well as a readalone, and it’s a vivid in medias res introduction to Earhart for kids not ready for Taylor’s Amelia Earhart: This Broad Ocean (BCCB 2/10). End matter includes a biographical afterword, a bibliography and list of internet resources, and a collection of (unsourced) quotations from Earhart. DS

--Bulletin of the Center for Children's Books (BCCB), February 2011

This gorgeous book presents a lyrical account of Amelia Earhart’s 1932 solo transatlantic flight, taking readers from the runway at Harbour Grace, Newfoundland, at 7:12 p.m., through an initially calm and eventually harrowing flight in which weather and equipment failure almost condemn Amelia’s small craft to the dark waters of the Atlantic, to daybreak and a safe landing in a pasture in Ireland. Burleigh’s skillful poetic language offers a gripping account that allows readers to connect with both the risk and reward of Amelia’s journey. For example: “1:00 a.m. The friendly night becomes a graph of fear: / a jagged line between where-I-am and not-quite-sure. / The altimeter needle swirls wildly. It is broken! / (She will never know how high she is).” Minor’s gouache-and-watercolor illustrations, richly textured and realistic, contribute greatly to the overall power and emotional impact of the story. An afterword provides a brief account of Earhart’s life, giving some necessary context to the episode dramatized in the main text. (technical note, bibliography, selected quotes) - KIRKUS, January 1, 2011

This vivid free-verse account of Amelia Earhart’s 1932 flight from Newfoundland to Northern Ireland, the first-ever solo transatlantic flight by a woman, settles into the cockpit and describes what the legendary pilot might have seen and felt during that long, tense, exhilarating trip. Minor’s paintings heighten the immediacy, depicting Earhart’s blazing red Vega in both long shots and close-ups, braving the mercurial sky. Although Burleigh’s imagery is sometimes overwrought, he succeeds in making the danger feel real, as when a storm ices the wings, pushing the plane down toward the ocean. “How close is the water’s surface? She bursts through the lowest clouds. / There it is, rushing toward her. Near. Nearer.” Such a harrowing night makes Minor’s exquisitely rendered ocean sunrise and the subsequent sight of land seem all the more gorgeous, exemplifying one of the quotes attributed to Earhart in the back matter: “The lure of flying is the lure of beauty.” And, as Night Flight suggests, the lure of feeling alive. The endpapers include a map of Earhart’s flight path, and there is a list of resources.
--The Horn Book, March/April 2011

Illustrated by Wendell Minor. 2011. 40pp. $16.99 hc. Paula Wiseman Books (Simon & Schuster). 978-1-4169-6733-0. Grades K-3
From start to finish, children are engaged in Amelia Earhart’s adventure as she becomes the first woman to pilot across the Atlantic Ocean by herself. End pages depict a sketch of Earhart’s single-engine plane, a compass, and a timeline. Told in third person, the reader feels and hears everything Amelia experiences as she journeys from Newfoundland, Canada, to Northern Ireland. Minor’s magnificent paintings capture the excitement of the adventure from start to finish through a variety of perspectives. Writing and illustrations are perfectly matched to take the reader from an ascending plane traveling toward blue skies to a vessel fleeing a darkened thunderstorm, nose-diving toward the treacherous Atlantic waters. As Earhart’s knuckles whiten and flames stream out of a cracked exhaust pipe, readers wonder what is to become of her. Morning comes and sunlight breaks through as Earhart lands with a jolt in Northern Ireland’s countryside. An afterword includes a historical biographical note and a technical note about the plane. Also included are a bibliography, Internet resources, and a selection of famous quotes by Amelia Earhart.