A Hymn Before Battle (Legacy of the Aldenata #1) (Compact Disc) 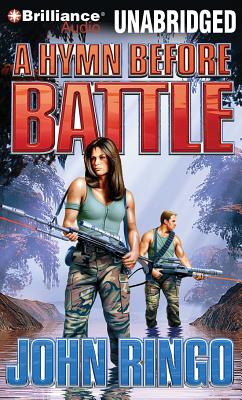 With the Earth in the path of the rapacious Posleen, the peaceful and friendly races of the Galactic Federation offer their resources to help the backward Terrans--for a price.

As Earth's armies rush into battle and special operations units scout alien worlds, the humans begin to learn a valuable lesson: you can protect yourself from your enemies, but may the Lord save you from your allies.

"John Ringo's first novel has bad guys from the wrong side of Hell, 'good guys' you wouldn't buy a used car from, heroism, cowardice, military stupidity and genius, millennia-old plots, Leopard tank versus plasma cannon, and a kick-butt suit of powered armor. It's a marvelous book, and the galactic neighborhood will never be the same once the monkey-boys and girls from Earth get done with it." --David Weber, author of the New York Times bestselling Honor Harrington series.