The Shadow of Saganami (MP3 CD) 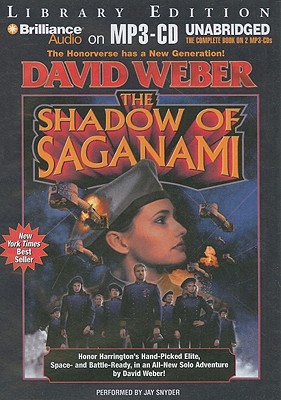 This is book number 1 in the Honorverse (Audio) series.

The Star Kingdom of Manticore is once again at war with the Republic of Haven after a stunning sneak attack. The graduating class from Saganami Island, the Royal Manticoran Navy's academy, are going straight from the classroom to the blazing reality of all-out war except for the midshipmen assigned to the heavy cruiser "HMS Hexapuma," that is. They re being assigned to the Talbott Cluster, a backwater far from the battle front. With a captain who may have seen too much of war and a station commander who isn t precisely noted for his brilliant and insightful command style, it isn t exactly what the students of Honor Harrington expected.

But things aren t as simple or tranquil as they appear. Pirates, terrorists, genetic slavers, smuggled weapons, long-standing personal hatreds, and a vicious alliance of corporate greed, bureaucratic arrogance, and a corrupt local star nation with a powerful fleet, are all coming together, and only "Hexapuma," her war-weary captain, and Honor Harrington's students stand in the path.

They have only one thing to support and guide them: the tradition of Saganami. The tradition that sometimes a Queen's officer's duty is to face impossible odds and die fighting.