Line of Glory: A Novel of the Alamo (Hardcover) 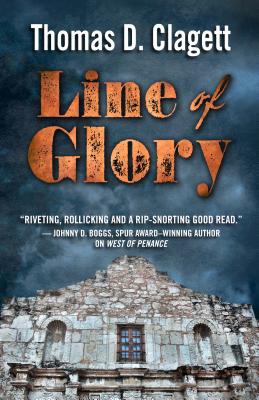 ""The story of the Alamo has long been lost in the mist of legend, but Thomas Clagett brings it to life in his gripping novel. His fast-paced narrative is so rousing and memorable that the reader will never forget the Alamo " Paul Andrew Hutton, author of The Apache Wars

The final 13 hours at the Alamo began around 5 o'clock on the afternoon of March 5, 1836. Colonel William Barrett Travis drew a line in the dirt and asked all those who would stay and fight to cross it. Destinies played out that night for four people. Susannah Dickinson, a woman of surprising gumption. Young James Taylor who came to the Alamo to free Texas from the tyrannical rule of General Santa Anna. "Moses" Rose who refused to cross Travis's line because he "wasn't prepared to die." Colonel Juan Morales, ordered to assault Crockett and his men at the south palisade, believed attacking the fort was foolhardy. But his real disgust was for Santa Anna, a man who allowed whims to dictate his decisions.