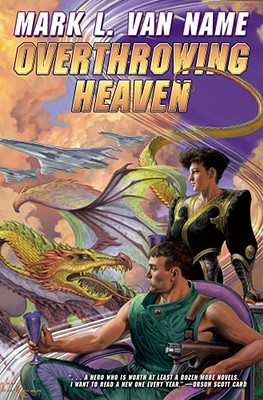 1. Rave reviews for Mark L. Van Name: - "Van Name has created a hero worth at least a dozen more novels . . . I want this to be a series. I want to read a new one every year." --Orson Scott Card - "One Jump Ahead is like well-aged white lightning: it goes down smooth then delivers a kick that knocks you on the floor." --John Ringo - "Hard real science smoothly blended into action that blazes like a pinball from one exotic setting to another. This one is very, very good." --David Drake - "Mark Van Name's headlong pace of story-telling reminds me a lot of Keith Laumer. . . . He's one of the very few modern authors I've seen who can manage that." --Eric Flint 2. Van Name is rapidly establishing himself as the next big name in science fiction adventure, and will attract still more enthusiastic reader attention with this novel that will appeal to readers of other Baen superstars, such as David Drake, John Ringo, and David Weber. 3. Trade advertising. 4. Consumer advertising in Locus, more. 5. Distribution of ARCs to top stores and sales reps. 6. Teaser chapter in Slanted Jack mass market. 7. BookSense mailing. 8. Co-op available. It began as a favor to a woman trying to get away from abusive husband. Jon Moore grew up in a prison laboratory. When he escaped with nothing but his body's nanotech enhancements and more anger than even a long lifetime could wash away, an entire planet died behind him. Memories of the things he'd done still haunted him; because of them, he often ended up helping those in need. His kindnesses frequently didn't work out well. This one really didn't work out well. It hurled Jon and Lobo, the intelligent assault vehicle and Jon's only friend, down an accelerating, ever more dangerous spiral involving: - Private armies and government covert ops teams - A courtesan who always seems a step ahead of him - Rival superpowers that define Good in terms of their own advantage and Ethics as whatever doesn't get in the way of their Good - And a brilliant, amoral scientist to whom human beings are just more experimental animals--and who might be Lobo's creator. Jon and Lobo take the reader on a headlong rush through armed enemies and untrustworthy allies and encounter what just might be the worst danger their partnership will face: the truth.

Mark L. Van Name, whom John Ringo has said is going to be the guy to beat in the race to the top of SFdom, has worked in the high-tech industry for over 30 years and today runs a technology assessment company in the Research Triangle area of North Carolina. A former Executive for Ziff Davis Media and a national technology columnist he's published over a thousand computer-related articles and multiple science fiction stories in a variety of magazines and anthologies, including the Year's Best Science Fiction. Jon & Lobo stories have appeared in a Baen anthology and Jim Baen's Universe.