Eye of the Storm (Hardcover) 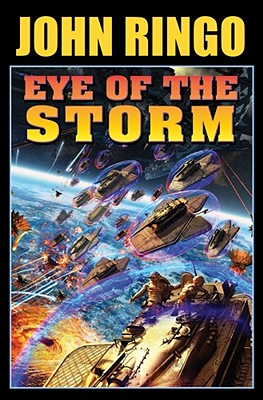 5.      4-page full-color brochure with CD-ROM of Posleen series and other Ringo/Baen backlist.

13.  Teaser chapter in all mass market releases for May and June.

In an instant the world changed for Lieutenant General Michael O'Neal. His beloved Corps of the last remaining ACS destroyed beneath the guns of the Fleet, his staff shot before his eyes, arrested on the charge of war crimes, he faces a short, one-sided, trial, a trip to the Fleet Penal Facility and a bullet to the back of the head while trying to 'escape.'

General Tam Wesley faces trying one of the most beloved heroes in Federation, not to mention a friend of decades, on trumped up charges. He alternative is having the last corps of humans that haven't sold their souls to the Darhel be taken apart like a chicken.

Then he finds out the bad news...

The Chaos Has Returned

With a new invasion from a previously unknown race threatening the Federation capital, Darhel Tir Dal Ron faces his ultimate nightmare: He is going to have to reinstate the one man human soldiers trust, a man with the power and knowledge to destroy the Darhel oligarchy forever. And instead convince him, against all logic, to save the Darhel.

Somebody is going to die. General Michael O'Neal, Supreme Commander, Federation Forces, just has to pick.