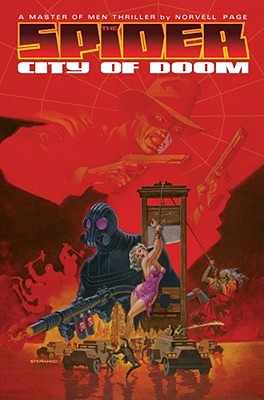 Three complete novels in one volume of the adventures of the mysterious masked crime fighter known as The Spider, hunted by the underworld and the police alike. - First, in The Spider and the Faceless One, a reign of terror grips New York, a city stalked by a killer with no face of his own, disguised with the tortured faces of his victims. Can even The Spider defeat such an incredible foe? - Then, in The Council of Evil, one of The Spider's deadliest enemies, long thought to be dead, has returned, and is using an inexplicable power to control the minds of others, beginning by turning The Spider's most trustworthy allies against their leader. - Finally, the Master of Men faces his most ruthless and deadly opponent in The City Destroyer as an unknown criminal mastermind uses an incredible device to melt the steel in the city's towering skyscrapers, bringing them crashing down in an orgy of destruction. Can The Spider unmask the madman before all of Manhattan is reduced to blood-spattered rubble?

Norvell W. Page is regarded as one of the leading writers in pulp fiction. He was a newspaper reporter after college, then successfully entered the world of pulp fiction, becoming a regular contributor to the legendary Black Mask, where Raymond Chandler and Dashiell Hammett first achieved recognition. Popular Publications lured Norvell Page to write for Dime Mystery magazine. Soon, Popular Publications, noting the popularity of the best-selling hero pulps Doc Savage and The Shadow, launched The Spider magazine in 1933, with a new novel of the exploits of the masked crime fighter appearing every month, written by Norvell Page under the pseudonym of "Grant Stockbridge." The magazine was published between October 1933 and December 1943 and ran for 118 issues, ceasing only when the services of Norvell Page were needed for the war effort. During his run, the Spider starred in two Columbia Pictures action serials and his image was successfully merchandised. (Today, a Spider ring in fine condition has a $10,000 value to collectors.) And the pulp is fondly remembered by many of its readers. The late Charles M. Schulz, creator of the "Peanuts" comic strip, once wrote, "I still remember how he used to leap into a room doing a somersault while his two heavy 45's jumped into his hands. They were great stories." He added, "I could hardly stand to live from one month to another when the new Spider novel would come out."