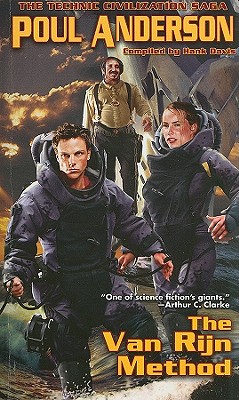 One of the Most Popular Characters Ever Created by Science Fiction’s Grand Master, Poul Anderson. A Complete Novel, The Man Who Counts, is Included in This Large Volume of Action and Adventure, Starring Nicholas Van Rijn, Volume One in the Complete Technic Civilization Series.

When the human race spread out among the stars, they took the profit motive with them, and none exemplified that fact better than Nicholas Van Rijn, interstellar trader and capitalist extraordinaire. He might look like Falstaff and talk in a steady stream of malapropisms, but anybody who might take him for a bumbling buffoon would quickly find themselves taken—to the cleaners!

In Nick Van Rijn, Poul Anderson created one of the most memorable and popular characters in science fiction, and now, for the first time, all the stories of Van Rijn and the Polesotechnic League will be published in chronological order in three volumes.

Also included are more stories of Van Rijn flamboyant exploits, plus stories set elsewhere in the Polesotechnic universe. And, after the three volumes chronicling the Polesotechnic League’s rise and fall will come more volumes, telling of the rise of the Terran Empire and the adventures of Poul Anderson’s other legendary character, Captain Sir Dominic Flandry.

Poul Anderson was one of the most prolific and popular writers in science fiction. He won the Hugo Award seven times and the Nebula Award three times, as well as many other awards, notably including the Grand Master Award of the Science Fiction Writers of America for a lifetime of distinguished achievement. With a degree in physics, and a wide knowledge of other fields of science, he was noted for building stories on a solid foundation of real science, as well as for being one of the most skilled creators of fast-paced adventure stories. He was author of over a hundred novels and story collections, and several hundred short stories, as well as several mysteries and non-fiction books. He died in 2001.