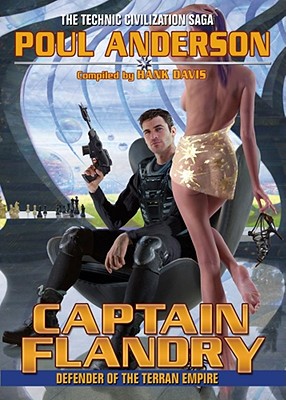 Captain Dominic Flandry, Science Fiction's James Bond, in a Large Volume of Blazing Science Fiction Adventure. The Fifth Volume of the Complete Technic Civilization Saga. No longer a brash, young ensign, Captain Dominic Flandry has risen in rank, but now appreciates fully that the Terran empire is old and tired, wanting to be left in peace. But the enemies it has made and the competing empire of Merseia will give it no peace. Too evenly matched for open warfare not to destroy them both, the opponents engage in subtle thrust and counter-thrust, feint and counter-feint, with Flandry in the thick of it.
Though through this and his succeeding adventures he will struggle gloriously and snatch victory from the alien jaws of defeat, Flandry is yet a tragic figure: a man who knows too much history, who knows that battle, scheme and even betray as he will, in the end it will mean nothing. For with the relentlessness of physical law the Empire is falling and the Long Night is approaching. If that darkness is not to fall in his own lifetime, if the things he cares about are to be saved, he must do what he can. And anyone, human or alien, who gets in his way will most definitely regret it.