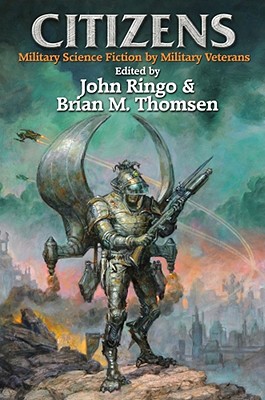 Science Fiction by the Best Writers in the Field—Who Also Happen to be Veterans of Their Countries’ Armed Forces—Selected by a New York Times Best-Selling Veteran-Author and a Hugo-Nominee Editor.

Citizens is a new kind of science fiction anthology. The names appearing between its covers are not only veteran authors, among the very best in the field, they are military veterans as well. New York Times best-selling author John Ringo (a veteran of the 82nd Airborne) and Brian M. Thomsen, a Hugo finalist and one of the most respected editors in the field, have selected a treasure trove of gems written by writers who know first hand what it means to wear their country’s uniform.
Among the top writers appearing in Citizens are Robert A. Heinlein, Arthur C. Clarke, Elizabeth Moon, Gordon R. Dickson, David Drake, Joe Haldeman, Harry Harrison, Keith Laumer, Frederik Pohl, Jerry Pournelle, Gene Wolfe and more, nearly all authors of best sellers, and recipients of Hugo and Nebula awards. Citizens will have strong appeal to readers of military science fiction, as well as more general readers.