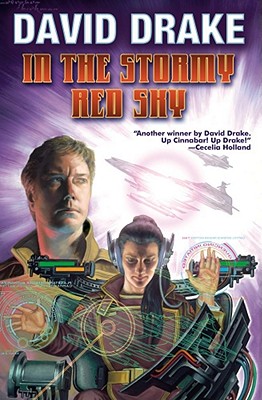 This is book number 7 in the Lt. Leary series.

Captain Daniel Leary and Adele Mundy are Back in Action, and the Stakes Have Never Been Higher. First Time in Paperback for This Novel in Best-Selling David Drake’s Popular RCN Space Adventure Series.

“Drake improves a classic military sf saga with fast action, wonderfully complex politics, and some of the most insightful characterization of his career.” —Booklist

Daniel Leary is Cinnabar's most successful space captain; his friend, Lady Adele Mundy, is its most efficient spy—but they've got their hands full this time as they face:

From palace to reeking jungle, from gunfights in grimy hangars to the flagship's bridge during a sprawling space battle, Leary and Mundy are in the thick of it again. Watch the galaxy explode—IN THE STORMY RED SKY

David Drake was attending Duke University Law School when he was drafted. He served the next two years in the Army, spending 1970 as an enlisted interrogator with the 11th armored Cavalry in Viet Nam and Cambodia. Upon return he completed his law degree at Duke and was for eight years Assistant Town Attorney for Chapel Hill, North Carolina. He has been a full-time freelance writer since 1981. Besides the bestselling Hammer’s Slammers series, his books for Baen include Ranks of Bronze, All the Way to the Gallows, Redliners, and many more. His “Lord of the Isles” fantasy novels for Tor are genre best sellers. In the Stormy Red Sky is the seventh in the popular RCN series. The previous titles are: With the Lightnings; Lt. Leary, Commanding; The Far Side of the Stars; The Way to Glory; Some Golden Harbor and When the Tide Rises.