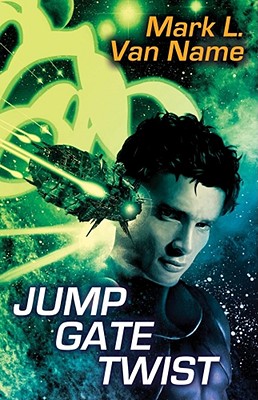 The First Two Novels--One Jump Ahead and Slanted Jack--in the Popular Jon & Lobo SF Adventure Series, Plus the Short Story Which Began the Series, and More--All in One Moderately-Priced Volume with a New Cover Treatment.
"Van Name has created a hero worth at least a dozen more novels . . . I want this to be a series. I want to read a new one every year." --Orson Scott Card
Jon Moore: A nanotech-enhanced warrior who wants nothing more than a quiet life and a way back to his strange home world. Lobo: An AI-enhanced Predator-Class Assault Vehicle, a mobile fortress equipped for any environment from the seabed to interstellar space. TWO WOLVES IN A GALAXY OF LARGER PREDATORS For the first time in a Jon & Lobo book, "My Sister, My Self," the short story which introduced Jon Moore. One Jump Ahead: Jon Moore wanted only to relax on the pristine planet of Macken--but Macken was the secret battleground of two megacorporations, both determined to control the local jump gate and the riches of an undeveloped world. Finding allies and enemies among terrorist groups and elite mercenaries, gun-runners and the only kind of government possible on a frontier short on rules and long on riches, Jon and Lobo fight to a climax with a corporate army that can't afford to leave any witnesses. Exotic settings, fast action, real tech, mechanically-enhanced animals--and a beautiful woman who's as deadly as a cobra Slanted Jack: The job looked simple enough: Jon agreed to help a con man, a friend from a part of his past he'd rather forget, protect a very special young boy. But the deal didn't stay simple, as each move Jon and Lobo made resulted in more danger and more enemies. The best con man Jon's ever known, a ruthless gang boss, a heavily armed group of religious fanatics, a beautiful woman with a mysterious agenda, and an interstellar government out to clean up a dangerous frontier world rush together toward an explosive climax--and Jon and Lobo are caught in the middle. Plus new introductions by the author, making this a package that every Jon & Lobo fan will want to buy.

Mark L. Van Name, whom John Ringo has said is going to be the guy to beat in the race to the top of SFdom, has worked in the high-tech industry for over 30 years and today runs a technology assessment company in the Research Triangle area of North Carolina. A former Executive Vice President for Ziff Davis Media and a national technology columnist, he's published over a thousand computer-related articles and multiple science fiction stories in a variety of magazines and anthologies, including the Year's Best Science Fiction. Jon & Lobo stories have appeared in a Baen anthology and Jim Baen's Universe. He blogs at www.markvanname.com.