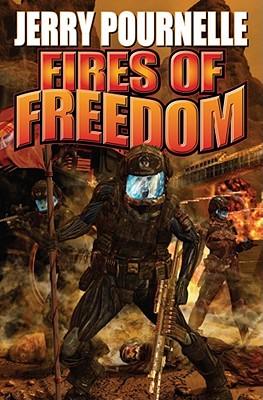 The struggle for independence on two colony worlds—Mars in the not-so-distant future, and a distant world circling another star in the far future, both threatened by powerful forces and faceless bureaucrats.

Birth of Fire: A teenage delinquent on a crowded, corrupt Earth, Garrett was given a choice: rot in prison on Earth, or be deported to Mars to work in the colony there. But on Mars he would find an inner strength that he had never known before, and when Mars revolted against the multinational corporations that controlled the colonist’s lives, Garrett was on the front lines in the battle for planetary freedom.

King David’s Spaceship: Set in the same universe as the New York Times best seller, The Mote in God’s Eye. A new Empire has arisen and is annexing Earth’s surviving colony worlds. Haven had fallen back to a nineteenth century level of technology, and the basic requirement for a colony world to be admitted to the Empire as a full-fledged member with the right of self-government is that the colony have space travel. Unless Haven can somehow develop a spaceship, and quickly, the planet will be ruled by Imperial agents and the inhabitants will be little more than medieval serfs.

Two complete novels in one volume by New York Times best-selling author Jerry Pournelle, telling of the eternal struggle of freedom against tyranny throughout the galaxy.

Jerry Pournelle (right), a past winner of the John W. Campbell Award, has collaborated with Niven on numerous bestsellers. He has also written such successful solo novels as Janissaries and Starswarm. He lives in Studio City, California.
Larry Niven and Jerry Pournelle were the joint winners of the 2005 Robert A. Heinlein Award.