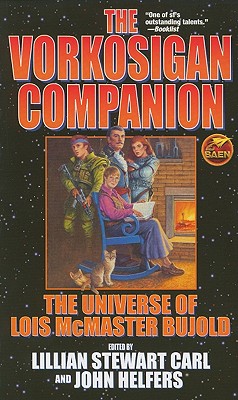 First Time in Paperback for the Book That Thousands of Fans of Lois McMaster Bujold and Miles Vorkosigan Have Been Waiting For.

Lois McMaster Bujold’s best-selling Vorkosigan series is a publishing phenomenon, winning record-breaking sales, critical praise, four Hugo Awards and a Nebula award. And the thousands of devotees of the series now have a book that will be a goldmine of information, background details, and little-known facts about the Vorkosigan saga. Included are an all-new interview with Bujold as well as essays by her on crafting the Vorkosigan universe, articles on the biology, technology and sociology of the planet Barrayar, appreciations of the individual novels by experts, maps, a complete timeline of the series, and more. Readers can’t get enough of the Vorkosigan series and they’ll jump at the chance to read this story behind the stories. Includes an excerpt from the new Miles Vorkosigan novel!

Lois McMaster Bujold is one of the most honored writers in the fields of science fiction and fantasy and has won six Hugo Awards and two Nebula Awards, including a Nebula Award for Falling Free, included in Miles and Metallurgy. She immediately attracted attention with her first novel, Shards of Honor, which began her popular Vorkosigan series, and quickly followed it up with The Warrior’s Apprentice, which introduced young Miles Vorkosigan, one of the most popular characters ever in science fiction. The recent novels in her fantasy series for Harper-Collins have been top sellers, and one, Paladin of Souls, took home her latest Hugo Award. The mother of two, Ms. Bujold lives in Minneapolis, MN.

Lillian Stewart Carl is the published author of nineteen novels and a number of short stories in the fantasy and mystery fields. She has worked at a few "real" jobs—as an engineering aide, a librarian, a newspaper columnist, and a college history teacher—but all along was writing. The mother of two grown sons, she lives in a tract house “disguised as a book-lined cloister” with her husband, a cat, and a number of plants.

John Helfers is an author and editor who has published more than forty short stories in various venues and edited more than a dozen anthologies. His media tie-in fiction has appeared in anthologies for the Dragonlance® and Transformers® universes, among others. He has also written both fiction and nonfiction books, including the third novel in the first authorized trilogy based on The Twilight Zone™ television series and a history of the United States Navy. Currently he is writing novels in the Room 59 thriller series for Worldwide Publishing.