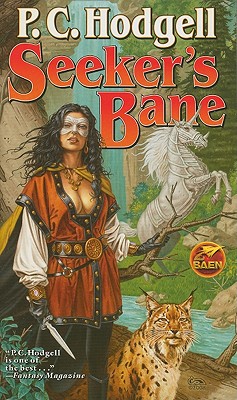 First Time in One Mass Market Volume, Two Novels in an Acclaimed Fantasy Adventure Series: Seeker’s Mask and To Ride a Rathorn. Jame at Wizard School. Harry Potter—She is Not.

Two epic novels of fantasy adventure in one volume:

Seeker’s Mask: After an epic adventure that will become the stuff of legend, Jame has been reunited with her older brother Torisen and with her people, the Kencyrath. But when she is placed in the Women's Halls and expected to become a normal, quiet Kencyr lady, normal and quiet are not what the Women’s Halls are going to get. Shadow Guild Assassins, ghosts, and other strange beings are soon after her, sprung not only from her own adventurous past but from the tragic, mysterious events that nearly annihilated her family in her father’s time.

To Ride a Rathorn: Jame’s adventures continue as she arrives at the randon military college Tentir to face cut-throat competition and find even more buried, poisonous family secrets. The Kencyr have a phrase, “to ride a rathorn,” referring to a task too dangerous either to accomplish or to give up. This is true for Jame both figuratively, given her military career in a college which no Highborn girl has ever attended before, and literally, in that she is being stalked by one of these murderous, ivory-clad creatures whose mother she killed and who is now after her blood.

All in all, Jame’s school days are shaping up to be anything but golden.

“Hodgell has crafted an excellent and intricate fantasy with humor and tragedy, and a capable and charming female hero. Highly recommended.” —Library Journal

Publisher’s Note: Seeker’s Bane has been previously published as two separate novels, Seeker’s Mask and its sequel To Ride a Rathorn.

Pat Hodgell can't remember a time when she wasn't passionately interested in science fiction and fantasy. She's sold stories to such anthologies as Berkley Showcase, Elsewhere III, and Imaginary Lands and has also published four novels. God Stalk and Dark of the Moon, the novels included in The God Stalker Chronicles, begin her critically praised fantasy saga which is concerned not! only with high adventure, but also with questions of personal identity, religion, politics, honor, and arboreal drift. She earned her doctorate at the University of Minnesota with a dissertation on Sir Walter Scott's Ivanhoe, and is a graduate of both the Clarion and the Milford Writers Workshops. Recently retired, she was a lecturer at the University of Wisconsin-Oshkosh in modern British literature and composition, and teaches an distant training course on science fiction and fantasy for the University of Minnesota. Pat lives in Oshkosh, Wisconsin, in a nineteenth-century wood-framed house, which has been in her family for generations. In addition to writing and teaching, she attends science fiction conventions, collects yarn, knits, embroiders, raises cats, makes her own Christmas cards and blogs at www.pchodgell.com.