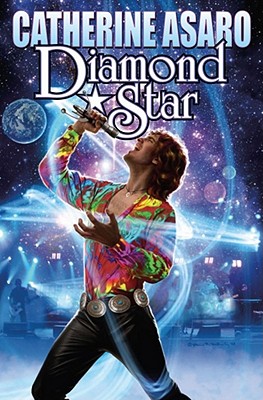 This is book number 16 in the Skolian Empire series.

Space Adventure with a Holo-Rock Beat by a Nebula Award-Winning Author. The Saga of the Skolian Empire Continues.

First Time in Paper back.

Del Valdoria was an heir of the Ruby Dynasty, rulers of the interstellar empire called the Skolian Imperialate. But he had no interest in being associated with the draconian measures his brothers used to maintain power. He just wanted to sing holo-rock—not a respectable activity for a Ruby prince. To make things more complicated, he was on Earth, far from home, and the Earth government wasn’t willing to let such a potential source of information and valuable bargaining chip leave. And then a major entertainment corporation took an interest in his music.

Del's mix of unsophisticated innocence and sensual wickedness was dynamite. Singing as Del Arden, he became a major hit almost overnight, the hottest thing in holo-rock. And that was a nightmare for the Earth government, because it put a spotlight on him, inviting the attention of assassins, kidnappers, and who knew what other dangers. If anything happened to Del, Allied Space Command might as well just walk up to Skolian Space Command and say, "Hey, let's have a war.”

Then there was a third interstellar empire, the Eubian Concord, warlike enemy of the Skolian Imperialate. His millions of fans on Earth might not know that their idol was a Ruby prince, but the Concord knew just who he was. And certain songs, if sung by a son of the Ruby Dynasty, might be considered an act of war . . .

Catherine Asaro has an M.A. in physics, and a Ph.D. in chemical physics, both from Harvard. She has done research at the University of Toronto, The Max Planck Institute, and the Harvard-Smithsonian Center for Astrophysics. A former ballet and jazz dancer, she founded the Mainly Jazz Dance program at Harvard and now teaches at the Caryl Maxwell Classical Ballet. She has written sixteen novels in the popular Skolian Saga as well as two near-future technothrillers, The Veiled Web and The Phoenix Code. Her other books for Baen include The Ruby Dice, Alpha and Sunrise Alley. She currently runs Molecudyne Research and lives in Maryland with her husband and daughter.