Do Unto Others... (Hardcover) 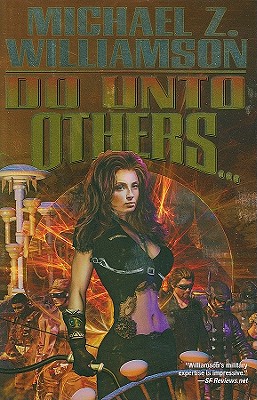 Do Unto Others as They Did Unto You--the Code of the Mercenary. Science Fiction Action-Adventure by a New Master of Military Science Fiction. The Prescot family were miners. At one time, they were contracted to develop technology for a mineral rich but uninhabitable system. Gradually, all the investors shied away. Then the Prescots broke through with the technology needed to exploit entire planets, and incidentally develop domed playgrounds for the perversely rich, including indoor ski slopes and cable cars over megavolcanos, casinos and rides. This created the economic problem of being the richest people in the universe, having more money than most governments and effectively unlimited resources. Money is a small blessing when enemies are quite willing to spend billions for the chance at trillions. Bryan Prescot and his daughter might as well have targets painted on their backs for the thugs, kidnappers and assassins their cmpetitors would throw at them. Bodyguards were necessary--Highly trained bodyguards who could be bought once and be utterly loyal no matter the circumstances. The altercation comes to a head inside the domes and mines of Govannon, with their enemy desperate to do anything to save their own lives, now that the gloves are off. Caron Prescot has only six bodyguards against an army, but she has two aces in the hole: The miners are on her side, and Elke, Ripple Creek's psychotic demolition expert, has a nuke. The problem with Elke having a nuke is that Elke WILL use it.

Michael Z. Williamson was born in Birkenhead, England and raised in Liverpool, and Toronto, Canada, before moving to Columbus, Ohio. An 18-year veteran of the US Army and US Air Force, he is a state-ranked competitive shooter in combat rifle and combat pistol. His other books include Freehold, The Weapon, Better to Beg Forgiveness . . ., and Contact with Chaos (all from Baen), the Target Terror series for Harper-Collins, so far including Targets of Opportunity and The Scope of Justice, and Hero, a collaboration with New York Times best-selling author John Ringo for Baen. He currently lives in Indianapolis with his wife Gail, their two children, and various cats that are not to be trusted.