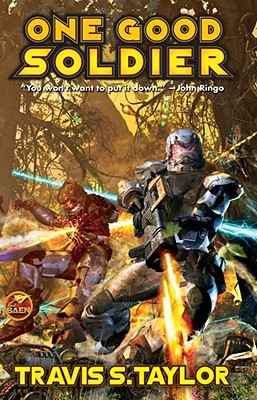 This is book number 3 in the Tau Ceti Agenda series.

The Exciting Sequel to The Tau Ceti Agenda.

One Good Soldier is the third book in the rapid-fire hard science military SF series of One Day on Mars and The Tau Ceti Agenda.  In another 24-like narrative set six years after the events in The Tau Ceti Agenda, this exciting action story unfolds in a single critical day in the history of the United States of the Sol System, the extra-solar colonies, the Separatist Revolutionaries of the Tau Ceti system, and all of mankind.

As another of Earth’s colonies, Ross 128, secedes from the union, the President of the United States, former marine major Alexander Moore, takes swift action to prevent a second American Civil War, this time on an interstellar scale. He sends the flagship of the U.S. Naval fleet through the Quantum Membrane Teleporter based in the Oort Cloud to the seceding colony.  But the Tau Ceti Separatists have stationed their own teleporter there and the flagship will be met with heavy resistance from the Separatist Navy.

And, unknown to the president and first lady, their eighteen year old military school cadet daughter has been kidnapped and whisked away to the Separatist leader's house on Tau Ceti.

Only the heroics and sacrifices of one good soidier after another can save the flagship, the Union, and the first daughter in an all-out winner-take-all showdown that reaches its final climax with frenzied hand-to-hand combat in the Oval Office itself.

Travis S. Taylor—“Doc” Taylor to his friends—has earned his soubriquet the hard way: He has a doctorate in optical science and engineering, a master's degree in physics, a master's degree in aerospace engineering, all from the University of Alabama in Huntsville; a master's degree in astronomy, and a bachelor's degree in electrical engineering from Auburn University. Dr. Taylor has worked on various programs for the Department of Defense and NASA for the past sixteen years. He's currently working on several advanced propulsion concepts, very large space telescopes, space-based beamed energy systems, and next generation space launch concepts. In his copious spare time, Doc Travis is also a black belt martial artist, a private pilot, a SCUBA diver, has raced mountain bikes, competed in triathlons, and has been the lead singer and rhythm guitarist of several hard rock bands. He has appeared numerous times on the History Channel’s series The Universe. He currently lives with his wife Karen, and their daughter in Harvest, Alabama.