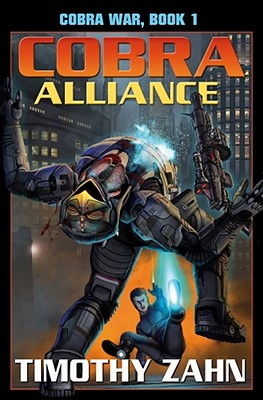 Earth had won its war with the Troft because of the Cobras, a guerilla force whose weapons were surgically implanted, invisible to the unsuspecting eye, yet undeniably deadly. The Moreau family were the most famous of the Cobra warriors, but their descendent, Jasmine “Jin” Moreau Broom, is worried about the current attitudes of the Cobra worlds and their leaders. Generations after the planets were settled, not everyone on the Cobra worlds thinks that the Cobras are worth their high cost, and favor cutting their funding.

Then a new factor is thrown into the mix. Jin receives a message, sender unknown, delivered by a Troft messenger:

Urgent you return at once to Qasama. Crisis situation requires your personal attention.

Years ago, a Cobra team, including Jin, had gone to Qasama at the urging of the Troft to counter a threat to other planets, both human and Troft. Jin and her family cannot think of a reason why any Qasaman would want Jin or any other Cobra to return to their planet. Moreover, the Cobra worlds have prohibited any of their citizens from traveling to Qasama, and backed up the prohibition with stiff prison sentences.

But the possibility of danger to the Cobra worlds is too important for Jin to ignore the message. She and her son Merrick, also a Cobra, book passage on a Troft ship to Qasama. But are they really going where their help is needed—or are they walking into a trap?