Invasion: Book One of the Secret World Chronicle (Hardcover) 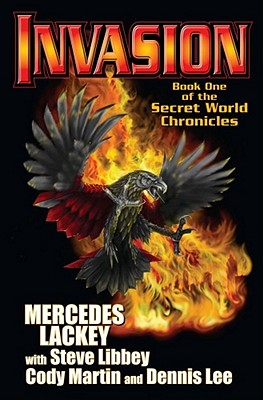 The world had become used to the metahumans—people sometimes perfectly ordinary,but sometimes quite extraordinary in appearance—who mostly worked with their governments as high-powered peace officers, fighting crime, and sometimes fighting rogue metahumans who had become super-criminals. Then that comfortable world ended in just one terrifying day.

Suddenly, all world governments were simultaneously attacked by soldiers in giant mecha robotic suits with the swastika symbol of the Third Reich on their metal arms. If these were Nazis, where had they been hiding since the end of World War II? And where had they gotten armor and weapons far in advance of anything on the planet? Weapons against which even the metahuman heroes seemed to be helpless . . .

Mercedes Lackey is the New York Times best-selling author of the Bardic Voices series and the SERRAted Edge series (both Baen), the Heralds of Valdemar series (DAW), and many more. She was one of the first writers to have an online newsgroup devoted to her writing. Among her popular Baen titles are The Fire Rose, The Lark and the Wren, and The Shadow of the Lion (with Eric Flint and Dave Freer). She lives in Oklahoma.

Steve Libby was born in Cincinnati, Ohio, a few months before mankind landed on the Moon, and ever since his head has been elsewhere. He has worked as a graphic designer, a teacher of computer graphics, a web designer, and occasionally plays guitar with a seven piece funk band.

Cody Martin is originally from Scottsdale, Arizona, and currently resides in Florida, where he’s a self-described anarchist and avid gamer.

Dennis Lee  was born in Seoul, Korea and was moved to Canada before the age of two. With a degree from the University of Toronto in pharmacology, he pursues a career in cell biology research when not writing about fantastical people and, of course, making them fight each other.