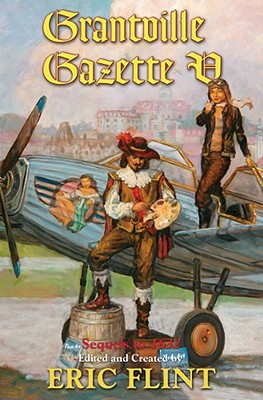 First Time in Paperback. The New York Times Best-Selling Series Continues. Return to Grantville, the American Town Lost in Time, and the Home Town of the Most Popular Alternate History Series of Them All.

The most popular alternate history series of all continues. When an inexplicable cosmic disturbance hurls your town from twentieth century West Virginia back to seventeenth century Europe—and into the middle of the Thirty Years War—you’d better be adaptable to survive. And the natives of that time period, faced with American technology and politics, need to be equally adaptable. Here’s a generous helping of more stories of Grantville, the American town lost in time, and its impact on the people and societies of a tumultuous age.

·         Cardinal Richelieu, France’s insidious master plotter and power behind the throne, learns of his prominent role in Dumas’ not-yet-written novel The Three Musketeers (not to mention the several movie versions), and starts a search for the “real” D’Artagnan.

·         Grantville is selling crystal radio sets so that Europeans can tune in to the Voice of America broadcasts, but the technicians from the future are at wit’s end, trying to reproduce “primitive” early twentieth century broadcasting equipment by trial and error—until a trained library researcher shows up in town.

·         The Dalai Lama of the seventeenth century receives a strange gift: an image of the Buddha which glows by a strange mystical force called “electricity.”

And much more, including stories by the New York Times best-selling writers Eric Flint and Virginia DeMarce, in the latest installment of this best-selling alternate history series.