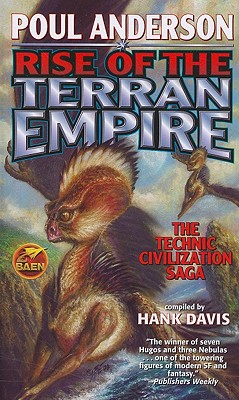 This is book number 3 in the Technic Civilization series.

First Time in Omnibus Mass Market. Nicholas Van Rijn, One of the Most Popular Characters in Science Fiction, and His Resourceful Assistant, David Falkayn, Against a Conquering Dictator. Includes Two Full-Length Novels, Mirkheim and The People of the Wind, in a Large Volume of Science Fiction Adventure.

Nicholas van Rijn, the most flamboyant member of the Polesotechnic League of star traders, could see dark times ahead. Fellow league members were using tactics verging on outright piracy, and others were all too eager to sell starships and high-tech weapons to alien barbarians. A planet not previously known for interstellar commerce suddenly revealed a secret fleet of armed starships, and started building an empire. Even if Van Rijn and his right-hand man David Falkayn could find a way to stop this blatant aggression, the glory days of the League were over. Hereafter, for its own protection against well-armed alien marauders the Earth must maintain a strong military fleet, and one charismatic man would found an empire that would learn nothing of the lessons history taught about the fates of other empires as it began annexing other star systems, whether they wanted to join the Terran Empire or not . . .

This is the third volume in the first complete edition of Poul Anderson’s Technic Civilization saga, and it includes a classic novella which appears here in book form for the first time. And the next volume begins the adventures of Poul Anderson’s other legendary character, Captain Sir Dominic Flandry.