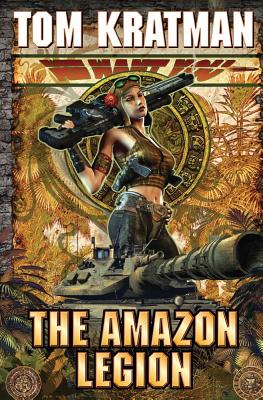 The Sequel to A Desert Called Peace, Carnifex, and The Lotus Eaters. What Happens When You Need Everyone to Fight? Bring on the Amazons. On the colony planet of Terra Nova, Carrera has achieved his revenge, destroying those who had destroyed his life by killing his wife and children in a terrorist strike. And, with this help of his second wife, he has thwarted an attempted coup that would have restored the rule of the oligarchy and undone his hard-won victory. But his fight is not over yet . . . The problem of the Tauran Union's control of the Transitway between Terra Nova and Earth remains, as does the problem of the nuclear armed United Earth Peace Fleet, orbiting above the planet. The Taurans will not leave, and the Balboans--a proud people, with much recent success in war - will not tolerate that they should remain. And yet, with one hundred times the population and three or four hundred times the wealth, the Tauran Union outclasses little Balboa in almost every way, even without the support of Old Earth. Sadly, they have that support. Everything, everyone, will have to be used to finish the job of freeing the country and, if possible, the planet. The children must fight. The old must serve, too. And the women? This is their story, the story of Balboa's Tercio Amazona, the Amazon Regiment.

, in 1974 at age seventeen, became a political refugee and defector from the PRM (People's Republic of Massachusetts) by virtue of joining the Regular Army. He stayed a Regular Army infantryman most of his adult life, returning to Massachusetts as an unofficial dissident while attending Boston College after his first hitch. Before turning to writing, he practiced law in southwest Virginia. Baen has published his novels, A State of Disobedience, A Desert Called Peace and its sequels Carnifex, The Lotus Eaters and now The Amazon Legion, as well as his stand alone novel, Caliphate and three collaborations with John Ringo in the Posleen War series: Watch on the Rhine, Yellow Eyes and The Tuloriad.