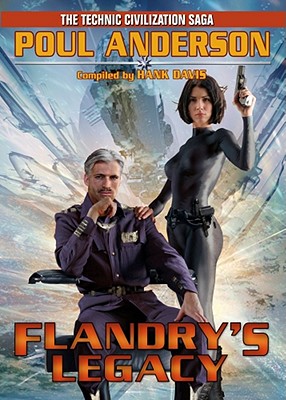 This is book number 7 in the Technic Civilization series.

Sir Dominic Flandry, Science Fiction's James Bond, and One of the Genre's Most Popular Characters in His Last Adventure. The Seventh Volume of the Complete Technic Civilization Saga. Sir Dominic Flandry is now an Admiral, but takes little joy in his new rank. He sees the rot in the Terran Empire on every hand and knows that the Long Night will inevitably fall upon the galaxy. His consolation is that measures he has taken while doing what he can to postpone the Empire's final collapse may shorten the coming galactic dark age and hasten the rise of a new interstellar civilization. In the meantime, he'll enjoy the comforts of a decadent civilization--and he'll always be ready for one more battle against the Empire's enemies. This concluding volume of the Technic Civilization saga, one of the milestones of modern science fiction includes two full-length novels:
A Stone in Heaven--When the daughter of Flandry's mentor asks for help, he intervenes, and finds he must thwart a would-be dictator's plans to seize control of the Empire. The Game of Empire--The Merseians, alien enemies of the Empire, have put into motion an insidious plan to bring the Terran Empire down. Flandry's daughter, Diana, and her feline-like alien friend have discovered the conspiracy, but can they stop it in time?
Plus three novellas and a novelette set in the time of the Long Night and the renaissance of civilization which followed it, concluding one of the grandest adventure sagas in science fiction.