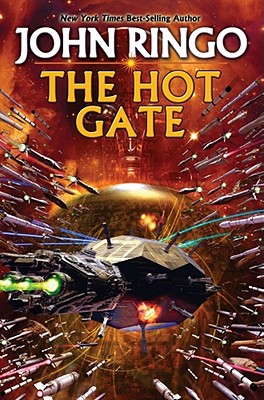 New York Times Best-Selling Author. The Big Showdown with an Alien Empire, to Keep the Earth Free--and Maybe Free the Galaxy as Well. The fight to free the Earth from alien domination began in Live Free or Die, and continued in Citadel. Now Tyler Vernon, and his troops aboard the gigantic battle station Troy, face a desperate battle with the forces of galactic tyranny. And the very survival of the Earth and its people is not all that is at stake. The galaxy itself must choose to live free or die--and if the tyrants win this battle, darkness will fall across the galaxy for millennia to come. " Ringo's SF is] peopled with three-dimensional characters and spiced with personal drama as well as tactical finesse." --Library Journal ." . . explosive. . . . Fans of strong military SF will appreciate Ringo's lively narrative and flavorful characters." --Publishers Weekly "The interstellar skullduggery is thick, and the final action sequence . . . is practically impossible not to read in one sitting . . . exceedingly impressive . . . executed with skill, verve, and wit." --Booklist "Ringo provides a textbook example of how a novel in the military SF subgenre should be written. . . . Crackerjack storytelling." --Starlog

John Ringo began writing for Baen in 2000 with his first release A Hymn Before Battle--the first novel in his Posleen Wars--which has become a New York Times best-selling series with over one million copies in print. The series continued with Gust Front, When the Devil Dances, Hell's Faire and Eye of the Storm. In addition, Ringo has penned the Council War series: There Will be Dragons, Emerald Sea, Against the Tide, and East of the Sun, West of the Moon. Adding another dimension to his skills, Ringo created nationally best-selling techno-thriller novels about Mike Harmon (Ghost, Kildar, Choosers of the Slain, Unto the Breach, and A Deeper Blue). His latest techno-thriller, The Last Centurion, was also a national best seller. A more playful twist on the future is found in novels of the Looking-Glass series: Into the Looking Glass, Vorpal Blade, Manxome Foe and Claws That Catch, the last three in collaboration with Travis S. Taylor. His audience was further enhanced with four collaborations with fellow New York Times best-selling author David Weber: March Upcountry, March to the Sea, March to the Stars and We Few. There are an additional five collaborative spinoffs from the Posleen series: The Hero, written with Michael Z. Williamson, Watch on the Rhine, Yellow Eyes and The Tuloriad, all written with Tom Kratman, and the New York Times best seller Cally's War and its sequels Sister Time and Honor of the Clan, both with Julie Cochrane. A veteran of the 82nd Airborne, he brings first-hand knowledge of military operations to his fiction.