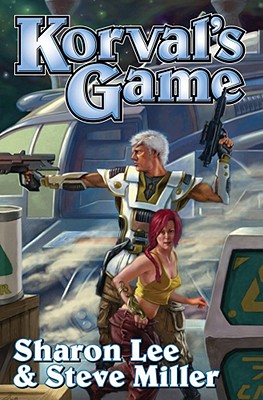 This is book number 11 in the Liaden Universe® series.

Back in Print at Last: Two Consecutive Novels in the Top-Selling Liaden Universe® Space Adventure Series: Plan B and I Dare.

The Liaden Universe® series has enthralled thousands of readers, and now two of its most exciting space adventure novels are combined in one popularly-priced Omni-trade volume.

Plan B: Val Con yos’Phelium is a fugitive. The heir of Clan Korval is wanted by the covert Liaden agency known as the Department of the Interior, whose rulers have declared unofficial war against the entire clan. With only his love, Miri Robertson, by his side, Val Con plans a desperate gamble by forming an alliance with Clan Erob on the planet where Miri was born.

But Val Con’s cousin, Shan yos’Galan, can’t wait for help that may never arrive. With enemy agents closing in, he invokes Plan B—setting in motion a series of events that will have dire consequences, not only for him and his life-mate, Priscilla Mendoza, but all of Liad . . .

I Dare: On the run from the agents of the Department of the Interior, Val Con has been separated from Miri. Shan, Val Con’s cousin, and Shan’s life-mate Priscilla, continue to search for him, believing that he’s the Clan’s last hope for survival.

But the DOI is attacking Clan Korval in a more subtle fashion. Pat Rin yos’Phelium—Val’s ne’er-do-well, nearly identical cousin, gambler and shooter—is offered control of the clan. The DOI believes they can manipulate him into serving their agenda.

“I rarely rave on and on about stories, but I am devoted to Lee and Miller novels and stories.” —Anne McCaffrey